Grand Delusion: Stalin and the German Invasion of Russia

This is Gabriel Gorodestsky's groundbreaking study, using Soviet and German archives, of the events leading up to Hitler's invasion of the Soviet Union in 1941. He challenges many of the long-standing beliefs about Stalin's preparations for war, not least Churchill's claim to have warned him about the German invasion plans. 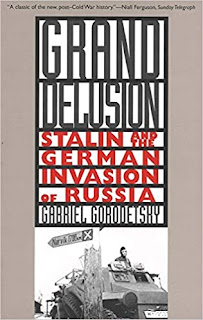 Most studies of this period look exclusively at German-Soviet relations. As the author points out, Stalin's relationships with Britain, Turkey and the Balkan states are also meaningful in understanding why he took the decisions he did. Warnings from Churchill were viewed through the prism of Stalin's deep mistrust of Britain. This started with the execution by the British of 26 commissars in Baku during the British intervention and the threat to Russia from a British fleet sailing through the Straits into the Black Sea. Concerns increased by the British/French plan to bomb the Soviet oilfields in 1940. The author argues that before the invasion, Stalin viewed Britain as a more significant threat than Germany. Even without this perspective, Britain's intelligence would be viewed as merely an attempt to embroil the Soviet Union into the war against the Axis.

In Britain, we tend to view Rudolf Hess's flight to Britain for what it probably was, the actions of a mentally unbalanced individual. However, in Stalin's mind, this was part of a British/German plot to negotiate a separate peace and attack the Soviet Union.

Hitler's decision to invade Russia may well have had an ideological basis going back to Mein Kampf. However, it was also directly linked to clashes with the Soviet Union over spheres of influence in the Balkans. This is confirmed by Keitel and Jodl who emphasised Hitler's concerns about the threat to Romanian oil supplies. Stalin's seizure of Bessarabia was driven by his need to control the Danube access to the Black Sea. Similarly, influence in Bulgaria was largely about access to the Straits and Turkey. German troops in Romania were not only blocking Soviet access to the Straits, but they were also poised for an assault into Ukraine.

Soviet intelligence was not asleep in the run up to the invasion. Regular reports were submitted on the German troop build-up, and Soviet spies confirmed an attack's likelihood. However, these were presented in the context of Stalin's view that war was not inevitable. Churchill's description of Stalin as a 'simpleton' is contradicted by British records and Cabinet discussions, which show that the information was not as definitive as Churchill later claimed in his memoirs. As we have seen, Britain's warning would be viewed sceptically anyway as the British ambassador to Moscow frequently pointed out. Stalin was desperate to avoid war for another year at least, to give time for the Red Army to prepare. He was, therefore, prepared to go the extra mile in negotiations.

When Zhukov was appointed Chief of Staff, he did step up defensive preparations due to Soviet military intelligence. However, this was hampered by Stalin's concern that he shouldn't provoke the Germans. In any case, Soviet intelligence was contradictory on where the main attack would fall, as the German plans changed as well, and Zhukov had many borders to defend.

This is an excellent study of the wider context of Hitler's decision to invade the Soviet Union. It provides a fresh perspective that puts Soviet concerns about Britain on a par with that of Germany. It seems strange today with the benefit of hindsight, but it was very real to the Russians in 1940/41.