This is the latest in Osprey's Combat series, which looks in some detail at two protagonists. Having painted up the armies and visited the battlefields, this was a no brainer for me. 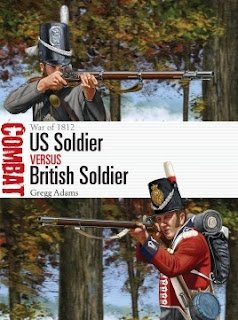 The meat of this book is a study of the opposing regular infantry types of the war. The USA had a very small regular army at the outset of the conflict, traditionally relying on militias of variable quality. The British had an experienced and effective regular army, hardened through the Napoleonic wars. However, numbers in Canada were limited due to the demands of the Peninsular and elsewhere.

The book looks at how the regular infantry was organised, recruited and equipped. As well as the leadership and logistics of fighting a war on the Canadian border. This is explained with supporting diagrams and some lovely colour plates.

How this all worked in practice is considered through the lens of three battles - Queenston Heights, Crysler's Farm and Chippawa. I visited two of the three during my visit, but Crysler's Farm is now underwater due to a dam project. Ontario does hydropower on a huge scale. Both surviving battlefields are well preserved with memorials and information boards.

The book includes excellent maps as well as orbats and unit organisation details.
Lasalle2 is my current go-to set of rules for tactical Napoleonics. Playing over Zoom, we decided to try Chippawa, which has an interesting mix of action on the plain and in the forest. Somewhat surprisingly, given the author is American, there are no army lists for the USA. However, it isn't difficult to create one using the open architecture of the system. The tricky unit was the First Nation forces who served on both sides in this battle, who don't really have a European equivalent. I went for a militia rating, giving them a better skirmishing factor, but with the 'rabble' trait to reflect lower morale. After all, it was the white man's war.
The game went pretty much as per the historical battle. The Americans had the larger force and their numbers told on both the plain and in the forest. I merged a couple of units because many were significantly understrength.

Disengaging is elegantly done under Lasalle, which is just as well. The British left flank collapsed and the Royal Scots started to move back covered by a successful charge from the Light Dragoons. Game done, but the coup de grace was delivered by Razzy jumping on the table after his grub! 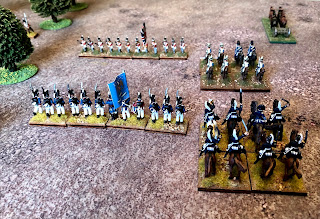 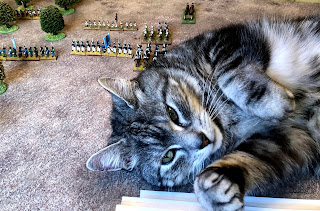