I have only really considered the Numidians as part of Carthaginian and occasionally Roman armies. This new Osprey in the Men at Arms series by William Horstead opens them up as a force to be reckoned with in their own right. 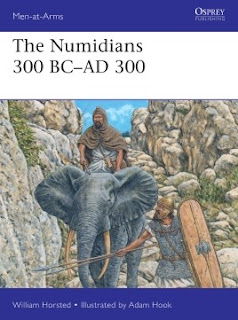 The Numidians were a tribal people based in modern Algeria and Tunisia on the borders of Carthage. This made them ideal allies for the Carthaginians who were always in need of manpower, and later the Romans when they landed in North Africa.

Numidian cavalry are their best-known asset, particularly when fighting with Hannibal in Italy. What these scantily clad warriors made of crossing the Alps is lost to history! They were javelin armed on small hardy horses, useful for reconnaissance, yet still effective on the battlefield. It is that battlefield success that wargame rules struggle to replicate on the tabletop. The author is clear that their tactics were traditional skirmish hit and run, which seems likely, although I still struggle with how this tactic drove the Roman cavalry off the field at Cannae and elsewhere.

The Numidians also fielded light infantry, sometimes operating with the cavalry, and may have included archers and slingers. They also used elephants, copying the Carthaginians use of smaller African elephants. He also suggests that some Numidian infantry were trained to fight with spear and shield by the Romans, a lighter version of the Libyan spearmen extensively used by Carthage. Some bodyguard troops may also have had light armour.

Looking at my 28mm Numidians, they are obviously painted too dark-skinned. The Numidians were olive-skinned from the Berber cultural group. I hope I didn't varnish them too heavily for the repainting I will have to do.

This book has everything you expect from the MAA series. The historical background, a description of the troop types, their appearance and weapons. The latest archaeological evidence is discussed in laypersons terms, along with the limited textual sources. Profusely illustrated, including colour plates by Adam Hook.

Having devoured this book in a session, it seemed a good choice for this week's Zoom game, particularly as the new SAGA book, Age of Hannibal, has them as a separate faction. I can just scrape together enough figures to create a SAGA force. Most of my figures were picked up in a bring and buy many years ago, and the sculpts are not great. Not sure which range they come from, but they are old school 25mm.

The opponents are Carthaginians (my very first wargame army), out to put down a revolt. The first round of javelin fire from the Numidians was devastating, and it was a short game after that. Even the Balaeric slingers were off form, and only the citizen cavalry beat off their opponents.  Carthago delenda est, I'm afraid. 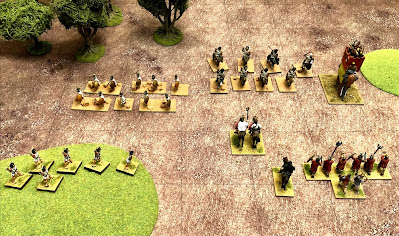 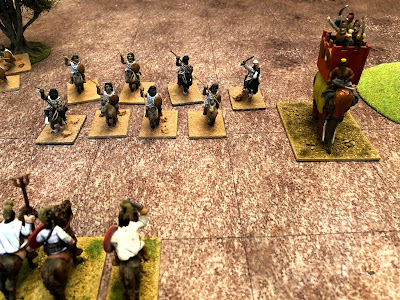 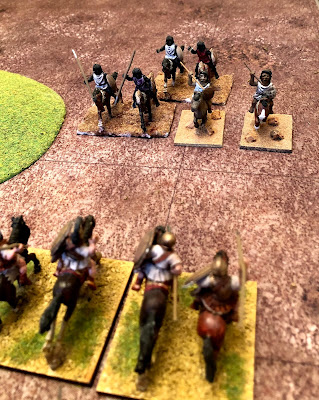