Anders Lassen was a Danish merchant seaman stranded abroad when the Germans invaded his country. He joined the Free Danes and then volunteered for the SAS. He would rise to the rank of Major, win the MC and then go on to become the only member of SAS to win the Victoria Cross. My interest in his story is mainly because of his service in the eastern Mediterranean with the SBS, a story well researched and told by the late Mike Langley. 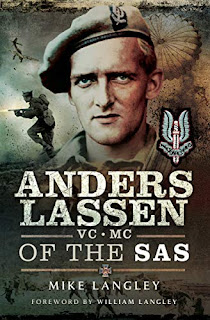 Lassen had been involved in raids on France and the Channel island of Sark before he was posted to the Middle East. He won his second Military Cross on Crete, where he led the first independent operation of the SBS. This raid blew up Stukas and Junkers 88s on Maleme airfield. I have visited this airfield, and while there is a hill nearby, the site is very open, making the repeated attacks all the more remarkable.

For operations in the eastern Mediterranean, his unit was based with many other special forces in Beirut. They took part in 'Churchill's folly', the 1943 Dodecannese campaign. Lassen was on Leros when the Germans counterattacked and helped evacuate British and Italian troops to Turkey. The Turks were only nominally neutral at this stage in the war and traded supplies for ammunition. Later they visited other islands where the SBS, supported by the local resistance, attacked German garrisons and gathered intelligence.

The book is full of stories of short and violent actions on these islands and the courage of the SBS and the locals. Most had volunteered to escape the spit and polish of regular regiments, and they enjoyed their leave with vigour!

His unit went on to work with the partisans in Yugoslavia and Albania. This was a dirty war, and the book catalogues many examples of torture, reprisals, executions and burning of villages. The next stop was Greece, where his small unit liberated Salonika with a mixture of threat, bluff and bribery. The power station was saved for £15 in gold. He effectively ruled the city for a week.

His luck ran out in the final campaign in Italy. He was killed assaulting a pillbox during the attack on the town of Comacchio, part of Operation Roast, on 9 April 1945. Exactly five years on from Denmark's occupation. He was awarded the VC posthumously, and his grave is in the war cemetery of Argenta Gap. In addition, there are other memorials in Scotland, England, Denmark and Israel.