When researching my current book, I came across one of Churchill's wilder plans to send a Royal Navy fleet into the Black Sea. Churchill put a proposal to the War Cabinet in October 1939 (CAB 65 W.M. 76 (40) 27.3-40.) to insert submarines into the Black Sea to interrupt Russian oil supplies to Germany. This was in addition to the better-known plans to bomb Russian oilfields in Baku, known as the Massigli Affair. In effect, this would have been a declaration of war against the Soviet Union as well as fighting Germany.

When the Soviets moved some 10,000 troops to the Turkish border, a Cabinet Committee rejected sending land and air support but did authorise the Royal Navy to enter the Black Sea in such numbers as to deter the Soviets. It is doubtful if the Royal Navy could have delivered at the time. The Soviet Black Sea fleet was 350 miles from the Straits compared to 850 miles for a sufficient Royal Navy fleet to get there. When the Turks indicated they were less than keen, it was suggested that the Polish navy could be deployed in the Black Sea to intercept German oil supplies from Batumi in the Soviet Union because Poland wasn’t a signatory to the Montreux Convention on the Straits.

Stalin saw the Straits as a route into the Black Sea and the Soviet Union. His view of Russia’s security was based more on the Tsarist world view than Lenin’s revolutionary vision. He remembered the British intervention in the Russian Civil War (again driven by Churchill), not to mention the Crimean War. So much so that the collapse of the Turkish-Soviet talks in September 1939 was largely due to Soviet demands to close the Straits to non-Black Sea powers. Recent work on the Soviet archives (Aug 1939 to June 1941) confirm Stalin’s security concerns about a British threat to the Soviet Union via the Black Sea and the Caucasus, possibly in collaboration with Turkey.

Later in the war, when Germany was considering an invasion of Turkey (Operation Gertrud), the Japanese ambassador reported home that a German concern was that it might give the Royal Navy access to the Black Sea, disrupting the land campaign in the Crimea and the Caucasus. Hitler did approach Turkey about allowing U-Boats through the Straits on the basis that one U-Boat would be sold to Turkey for every one they allowed through. When this came to nothing, he considered sending dismantled U-Boats down the Danube to the Romanian port of Constanta. However, this proved logistically complex. The Germans did supply Romania and Bulgaria with ships and aircraft for operations in the Black Sea.

Finally, when it looked as if Turkey might join the war in February 1944, Churchill proposed sending six to eight submarines to the Turkish base at Ismet for operations in the Black Sea.

The Soviet Black Sea Fleet in 1941 was based at Sevastopol, Nikolaiev, Novorossiysk, Poti and Batum. It consisted of one battleship, six cruisers, 18 destroyers, 44 submarines, 84 MTBs, 18 minesweepers, and 56 smaller craft. Early losses meant that large numbers of the crew were deployed as naval infantry. They did well, but the loss of technicians deprived the surviving ships of specialist skills.  The NKVD operated patrol craft, and the naval air arm had maritime reconnaissance regiments using Beriev, Chetverikov and Catalina flying boats.

A typical Soviet naval action later in the war was a coastal raid using ex-fishing boats and MTBs and some purpose-built landing craft. Larger surface ships were used to support land operations, although there were a few attacks on the Romanian coast. When the Red Army entered Bulgaria in 1944, the Soviet Black Sea fleet moved vessels to Burgas. These would have been part of a Soviet plan to attack Turkey, which Stalin eventually called off.

So, lots of 'what-ifs' for naval wargames here. Small boat operations using Cruel Seas and fleet actions using Victory at Sea. I have the Turkish and British ships, and an order to Navwar delivered the Soviets. I suspect I will give in to some Soviets for Cruel Seas next.

I went for a small fleet of two cruisers, four destroyers and four submarines. I use 1/3000 scale for Victory at sea, as I don't like the Warlord ships. 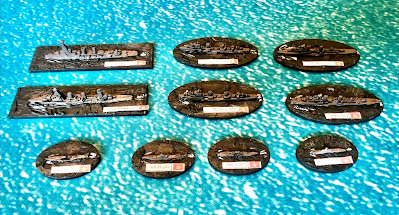 And onto the tabletop with my new Soviet fleet intercepting a joint Royal Navy and Turkish fleet heading out from the Bosporus. We will pass quickly on, as it simply confirmed that I am no sailor. Why can't ships manoeuvre like tanks! 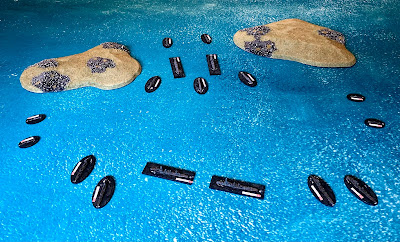