Macbeth: in literature and in history

You get two for one in this review. The latest in my Nigel Tranter reread is Macbeth The King, Tranter's take on the 11th century King of Scots. Then because I wanted to understand the historical figure, Fiona Watson's Macbeth: A True Story. 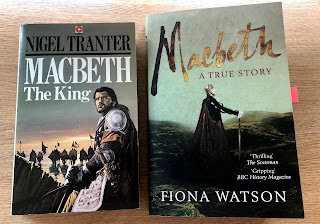 For most people, the story of Macbeth is understood through Shakespeare's 'Scottish play', which my generation often studied as part of English literature at school. While it's a fine story, it is historical nonsense. The real Macbeth was born around 1005, and while we know little about his early life, he became Mormaer (sub-king) of Moray in 1032. Moray is in the north of Scotland, a much wider area than the current local authority district. King Duncan I invaded Moray in 1040 and was killed by Macbeth, who then became the High King of Scots in his place. The Mormaers elected the King of Scots in those days, and Macbeth had a legitimate claim.  The name Macbeth means 'son of life'.

He wasn't a usurper as portrayed by Shakespeare, although, in fairness to the Bard, his reputation had been traduced by medieval historical sources before he took up the story. Shakespeare's depiction of Macbeth was influenced by the fact that King James VI (Scotland) and I (England) was descended from Malcolm III, whereas Macbeth's line died out with the death of his stepson Lulach. Shakespeare knew how to curry favour with the current monarch!
The historical sources for this period are limited, but even Tranter seems to drift some way from the facts. A key theme in his book is a close relationship with Thorfinn 'The Mighty' Earl of Orkney, described as a half-brother who supports him militarily. What we know about Thorfinn largely comes from the Norse sagas, but Watson says he was mostly an enemy of Macbeth.
They both made pilgrimages to Rome, a rare event for Scottish leaders of the period. Tranter has them sailing there together in a fleet of longships when they both made their separate journeys there overland. This was not simply a pilgrimage; there were ecclesiastical territorial disputes as the Columbian church in Scotland did not form part of the Catholic church, although parts of Scotland were claimed by the Archbishop of York.
Macbeth married the wife (Lady Gruoch) of his predecessor mormaer, who he probably killed (Tranter has him killed by King Malcolm II), and recognised her son (Lulach) as his successor.
Duncan's family fled to England after his death, where Earl Siward of Northumbria used them to stir up revolts against Macbeth. He also invaded Scotland on several occasions. Despite this, Macbeth's rule appears to have been largely peaceful and effective. The fact he felt secure enough to leave Scotland and travel to Rome is evidence enough. He was also the first to introduce Norman knights to Scotland. He probably met some of these during his travels, and they came to Scotland after being exiled from the English court.
Macbeth was killed by the future Malcolm III after another invasion from England in 1057. He was succeeded by Lulach, who was assassinated six months later by Malcolm.
Macbeth's armies would mostly have been the typical spear-armed infantry of the period, often mounted on garrons (small horses) but dismounting to fight. However, he did deploy more light cavalry and the Norman knights.