For Lord and Land

This is the eighth book in Matthew Harffy's historical fiction series The Bernicia Chronicles, set in 7th century Britain. More specifically, in Northumbria and what is today southern Scotland, which at the time of this book was split between Bernicia in the north and Deira in the south. 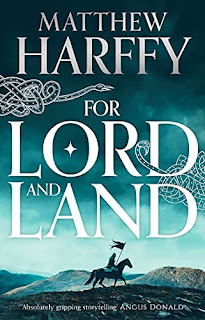 Our hero is Beobrand, Lord of Ubbanford and his Warband the Black Shields. He is oath sworn to Oswiu of Bernicia, who is pursuing a campaign again Oswine of Deira. There are, in effect, two stories in this book. One of Beobrand's men (Cynan) goes off to Reghed to assist a character from a previous book whose family is being dispossessed of a lead mine by the local lord. The other is various campaigns into Deira which Beobrand himself plays a key role. Not to mention an excursion to Kent, which leads to a clash with the Mercians.

While we don't know a great deal about the actual history of the period, the author sticks pretty broadly to the historical record, simply inserting characters and stretching events to fit the narrative. For example, the final clash at Wilfaresdun was probably near Catterick, ironically now a major army base. I won't spoil the story, but it doesn't end there.

I have really enjoyed this series. It is very reminiscent of the Berard Cornwall style of historical fiction, and for those who enjoyed The Last Kingdom, the Bernicia capital is the fortress of Bebbenburg. There is plenty of shieldwall action and skirmishing, coupled with political sub-plots and romantic interest as well.

I did think the series was perhaps running out of steam, as there is only so much you can extract from this period. However, it looks like the next book will involve a trip to Rome, which should generate a fresh storyline. This style of historical fiction is my choice of bedtime reading, and I suspect I will pick up the next volume. I should have nightmares given the level of violence!

There are lots of scenarios for the wargamer. Armies were relatively small, usually made up of the warbands of the kingdom, supplemented by the Fyrd. It works particularly well for skirmish and small battle games like Saga. My 28mm Saxon figures work fine for both sides. 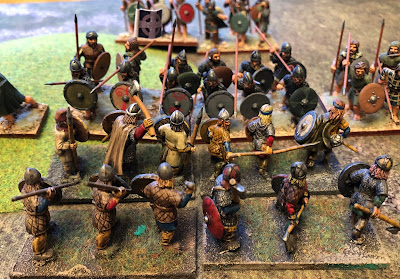