A new Bernard Cornwell book is usually a reason to down tools, a new Sharpe doubly so! It felt strange reading fiction from a hardback, but bizarrely it was cheaper than the Kindle version. 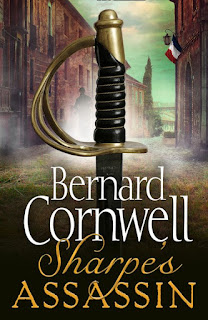 This story picks up after the Battle of Waterloo. Sharpe and Harper are burying Dan Hagman, one of my favourite Sharpe characters, whose singing voice will be familiar to those with the Sharpe TV series music CD. But, of course, the war is not over for Sharpe and his battalion. I still can't quite get my mind around Sharpe as a colonel.

He is summoned to an interview with the Duke of Wellington, who has a special mission for Sharpe and his battalion. This involves rescuing a British agent from a fortress in France and then taking him to Paris. All this was well ahead of the converging British and Prussian armies. Said agent lacks the basics of upper-class common sense and gets arrested. Behind the plot is the secret La Fraternité society which aims to disrupt the Allies by assassinating Wellington and other leaders. One of the leaders is a Sharpe like French voltigeur.

As you would expect from a Sharpe story, there is plenty of action, including a climactic firefight. In addition, there are sub-plots, treachery and internal conflict with other officers who resent a jumped up ranker being in command. Romance and threats to his loved ones are there as well.

I don't think I am ruining the story if I hint that Sharpe may be battered but survives. That leaves open the prospect of further books. Sharpe as a Normandy farmer isn't really on. Where next? It has to be the South American Wars of Liberation, where many riflemen did actually fight.

Perhaps not the very best Sharpe story, but still excellent. The benchmark for all other authors in the genre.