A Viking in the Sun

This is the second Lion Rampant supplement written in collaboration with the University of Edinburgh. It loosely follows the journeys of Harald Hardrada (more properly Harald Sigurdsson) and his fighting journey from Norway to the Byzantine Empire. Harald is better known in the UK for his failed attempt to take the English throne in 1066, but he had a much more exciting story before that. 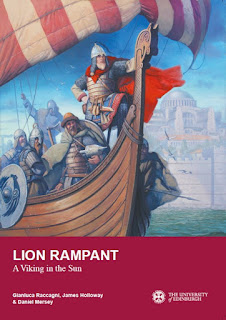 This is the late Viking period; Harald was even a Christian! He was born sometime around 1015. Harold was forced into exile after his brother was killed at the Battle of Stiklestad 1030 and the throne seized by Cnut the Great. He took the route favoured by many Vikings before him, into Kievan Rus and then onto Constantinople. He joined the Varangian Guard around 1034.

Harald brought around 500 men with him from Rus and spent ten years fighting for the Byzantines all around the Mediterranean. These campaigns are covered in the army lists for Lion Rampant in this supplement. It also brings some optional rules that better reflect the troop types in this earlier period. I am looking forward to trying a few of these, particularly feigned retreats. Not entirely convinced by the medieval hand grenades, but I'll give them a go.

The new factions include the Varangians, Byzantines, Southern Italian Principalities, Normans and Muslim powers. These will be useful for extending Lion Rampant into other periods, as many already do. But I am sure there will be more supplements. Each faction has some special rules and limitations.

Harald fought in Sicily and Italy as well as the Balkans, so he would have bumped into the Normans as allies and enemies. This is another of my favourite historical stories, beautifully told by John Julius Norwich. The second half of the book covers campaigns, allowing the player to link games together. Lion rampant can be played in an hour or two, so this works very well. There are three campaigns based around his fighting in the Holy Land, Sicily and Italy. There are special rules and scenarios for each campaign.

This is an excellent supplement for a set of rules I have let lapse recently. They are handy when you want a quick game, as it requires very few figures and a quick set-up. Highly recommended.

I was listening to the History Hack podcast on my morning walk today. They have an entertaining interview with Georgios Theotokis about his new book on Bohemond of Taranto. Very to the point here.
Posted by Balkandave at 16:31