A friend who works as an academic in Eastern Europe was in touch this week about playing a game over Zoom this weekend. He was writing an article on the current stand-off in Ukraine and wanted to play a modern game based on that conflict. He uses micro-armour, which isn't ideal over Zoom, so we decided to use my 20mm figures and the modern adaptation of Bolt Action. You can download these from Jay's Wargaming Madness.

My initial reaction was that it felt a little close to home, at least for my friend. Wargamers occasionally get this feeling, but then remember that we are only moving model soldiers across a tabletop. Having said that, the situation in Ukraine is a bit worrying, and my friend had just interviewed contacts in Russia and Ukraine. Russia has more troops on Ukraine’s eastern border than at any time since the Donbas war’s “hot phase” in 2014/15 when it annexed Crimea and backed the separatist territory seizures. They are also massing in the Rostov region, which points to a direct attack on Ukraine rather than simply supporting the Donbas' separatists. David Pratt has written a long piece in today's Herald newspaper, which is worth a read. My friend concurred with the Moscow Carnegie Centre analysis, “The ostentation with which the troops are being moved confirms that Russia is sabre-rattling rather than contemplating a blitzkrieg,”

With the US reportedly planning to send ships into the Black Sea to support Ukraine, this could have wider implications. It would only take a spark to start something. As David Pratt concludes, "Only the foolhardiest, however, would claim with any certainty to know what will happen next."

On the tabletop today, there was little comfort for Ukraine. Their troops hold a supply dump that the Russians and their separatist allies are going to attack. 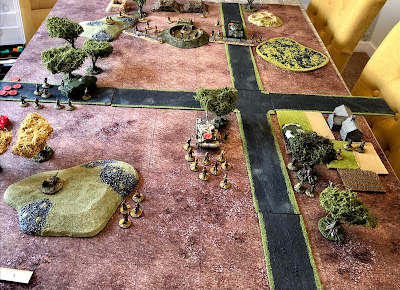 I sent my best Russian troops and armour down the centre to pin the defenders while working two further squads around the flanks. We kept it simple with no artillery or aircraft. The opening tank exchange went the Russian's way, but a Ukrainian light ATM almost knocked the T80 out. It did succeed in knocking out the BMP on the Russian right. 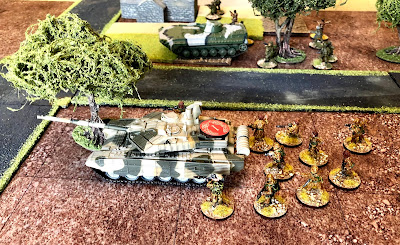 The Russian left wing squad with its BTR 80 in support made good progress using the woods as cover. But then got shot up badly in a firefight. 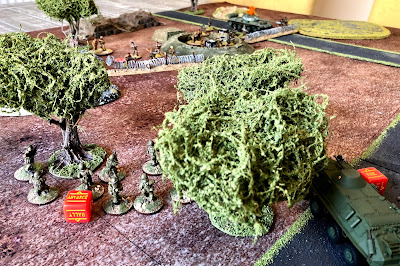 The Russian firepower's cumulative impact was beginning to tell as the Russians crashed through the Ukrainian defences. Game over. 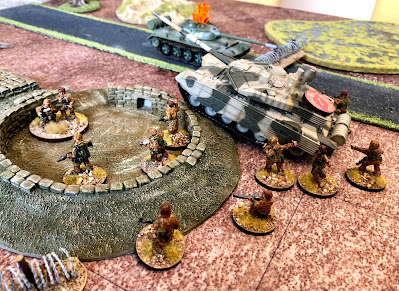 The game was all over in five moves, and the rules played well. Let's hope this conflict remains on the tabletop.