My re-reading of Nigel Tranter's historical fiction books continues with the second book chronologically, Columba. The story of St Columba and the high heroic days of the early Celtic church. 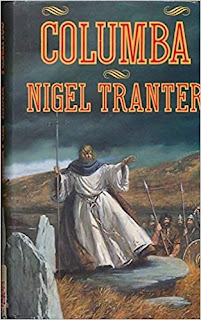 His proper Irish name was Colum mac Felim, and he is known in his native Ireland as Columcille. He was born in AD521 and is credited with spreading Christianity to what is today Scotland. He was trained in Ireland and got involved in a religious controversy that may have led to the Battle of Cúl Dreimhne or the Battle of the Book. This conflict forms the opening chapters of Tranter's story. Consequently, Columba decides to lead a mission to the Scots Irish kingdom of Dalriada (Dal Riata) on Scotland's west coast.

This was a nominally Christian state bordering on the Pictish state of Alba, which was pagan. Columba was given the island of Iona as a base from which he expanded his missionary activities to the many islands off Scotland's west coast. Tranter describes the scenery on his many journeys brilliantly. You can almost smell the sea air. I'm biased because this is one of my favourite places on earth.

One of Columba's many achievements was to link the coronation of kings to a Christian service. This led to many kings being buried at Iona. In 1549 an inventory of 48 Scottish, 8 Norwegian and 4 Irish kings was recorded.

He then decides to launch a mission into Alba and persuades the Pictish King in the capital Inverness to allow missionary activity. Helped by the story of him seeing off the water monster. This is at least one of the stories that underpins the legend of the Loch Ness monster, which draws many thousands of tourists to the shores of the Loch today. En route he also helps the family of the chieftain at Urquhart, now a well known medieval castle.

He continued to establish many churches and monasteries across Scotland and acted in a diplomatic role to bring the various kingdoms together in an alliance against the encroching Angles. He died in 593 or 597, the sources differ. He was buried in Iona but his relics are purported to have been carried by Scottish armies in battle. Something he would not have approved of. This includes Bannockburn in 1314.

The book is classic Tranter. Fleshing out what we know of his life with narrative and evocative descriptions of his journeys. Great read, although if you like your historical fiction with plenty of battlefield action, you might want to skip this one. Sex and violence is in short supply!