Struggle for the Middle Sea

This is Vincent O'Hara's study of the naval war in the Mediterranean between 1940 and 1945. Having reviewed David Hobb's excellent new book on naval air warfare, I realised there were some gaps in my knowledge of the all-important naval campaigns. This book is just what the Admiral ordered! 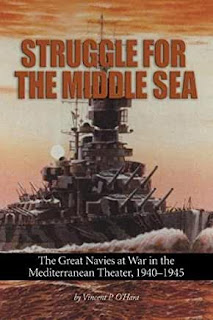 The author starts by dispelling some well-worn myths. Not least that the Italian navy was useless, or as one more recent American author put it, "Mussolini's lazy sailors disdained to prepare for serious warfare'. In fact, the Italian navy fought hard and well, keeping Italy's African and Balkan armies supplied for three years and largely controlling the central Mediterranean. Rommel blamed supply shortages for his defeat at El Alamein, claiming only 954 tons of fuel were delivered before his attack. In reality, deliveries amounted to 20,037 tons. In Rome, the Japanese naval attache reported that the Italian navy was sound; their problems were poor collaboration with the air force and outdated night-fighting techniques. Their submarine fleet, although large, were less deadly than their German counterparts due to unrealistic training and flawed doctrine.

The other point that strikes the reader of this book is the sheer scale of naval action in the Mediterranean. Major Italian warships fought 34 surface actions, and these are all covered in the book, usually with helpful maps and lists of the ships engaged. More surface actions were fought in the Mediterranean by more participants than anywhere else in the war. A total of 55, compared with 49 in the Atlantic and 36 in the Pacific.

Naval warfare has always been crucial to controlling the Mediterranean and to commerce. In 1938, 86% of Italy's imports arrived by sea, and most of that came through British controlled chokepoints at Gibraltar and Suez. Convoy protection played a key role for the Italian and British fleets. In Britain's case, to reinforce Malta and its armies in North Africa and for Italy, the shorter crossing to Tunis and Tripoli.

The German contribution early in the war was primarily through airpower. Later in the war, U-Boats played a growing role with S-Boats and a wide range of small ships ferrying troops and supplies around the Aegean. They also used former Italian warships after the Armistice. 40% of all large warship losses the Germans suffered in the war occurred in the Mediterranean. They accounted for 57% of allied losses.

The Royal Navy had some important advantages. Not least their better intelligence, having cracked the Italian and German codes, but also the use of radar on ships. This meant they knew roughly when and where convoys were going. The British were also good at night fighting, which meant they could engage without being interdicted from the air. The Royal Navy only lost three major warships, all destroyers, as a result of Italian surface action.

In summary, the Italian navy fought well; the French were formidable when engaged; the Germans fought a remarkable rearguard action; the Americans came in great strength: and the Royal Navy were workmanlike at worst and brilliant at their best.

I have settled on Victory at Sea for my WW2 fleet rules, using the updated Warlord version, but without their ship models. This book is full of scenarios for large fleet and smaller actions. I decided to play one of the many smaller engagements to get used to the rules with a cruiser and a couple of destroyers per side. I struggle to think of a wargame without terrain, so I dropped a couple of Aegean small islands into the battle.

The Zara turned out to be a bit too much to handle with her heavier guns. And I still struggle to learn how to sail a ship. Why won't they just stop!