The Anglo-Soviet Alliance: Comrades and Allies during WW2 is a new look at Britain and the Soviet Union during the Second World War by Colin Turbett. I'll declare at the outset that I know the author, although more from his work on rural social work and his trade union activity rather than his historical writing. Coincidently, I was admiring the view of his Arran home on my walk this fine crisp morning. 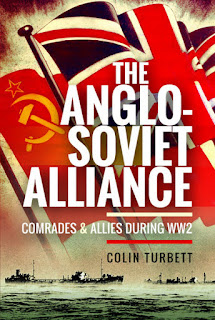 As the author outlines in his introductory chapters, the alliance was an odd experience for both political leaders. Churchill had a long history of opposing the Soviet state, persevering with interventions in the Russian Civil War, long after losing popular and political support at home. Stalin, based in southern Russia during the civil war, had good cause to remember the British intervention. As Gabriel Gorodestsky argues, before Hitler's invasion, Stalin viewed Britain as a more significant threat than Germany.

It was also a challenging time for communists and Conservatives in the UK. Many in the Communist Party of Great Britain's (CPGB) initial reaction was to support the war in 1939 as an anti-fascist popular front. However, this line was quickly changed when Moscow dictated a new line following the Molotov-Ribbentrop Pact. The author has a fine collection of pamphlets and leaflets from the period, and he shows how CPGB leader, Harry Pollit's 'How to Win the War', was quickly replaced with Palme Dutt's 'Why this War?'. The idea that carving up Poland was "an extension of the boundaries of world socialism", was a challenging sell, and the CPGB lost popular support. Churchill managed to sell his new line of supporting the Soviets with classic Churchillian rhetoric, "If Hitler invaded hell I would make at least a favourable reference to the devil in the House of Commons."

The book then moves on to the wartime alliance after Operation Barbarossa, although I think he slightly overstates Hitler's war aims, which were actually quite limited. Again Gorodestsky is good on this. Stalin had equally given up on expanding communism, as the Comintern's winding up in 1943 shows. In practice, it hadn't met since 1935. Even the late war strains over Soviet expansion were more about nationalist buffers than any dream of world communism.

The alliance changed views of the Soviet Union on the home front with Soviet newsreels being played in cinemas and the government sponsoring trips to Russia. However, playing The Internationale with other Allied anthems on the BBC was a step too far for Churchill! The CPGB's Daily Worker newspaper remained banned until August 1942. Churchill's wife Clementine was the driving force behind raising funds for Russia, so much so that Churchill told the Soviet ambassador that his wife had become 'totally sovietized'. The CPGB may not have made much progress politically. Still, they were particularly well organised in the trade unions representing industrial workers and achieved important victories for workers on the home front.

While this is primarily a social history, the military aspects of the alliance are well covered. These include supplies to Russia, particularly the Arctic convoys to Murmansk, which had a British base. This resulted in a degree of fraternisation that both the British and the NKVD found challenging. Soviet aircrew were trained at Errol Airfield in Scotland on the Albermarle transport aircraft, and the Soviet female sniper Lyudmila Mikhailovna Pavlichenko (Lady Death) made a hugely successful tour in 1942.

The story of the convoys is told in detail. We are reminded that around 27% of all serving British merchant seafarers in WW2 died, a much higher proportion than those serving in the armed forces. The crews came from all over the world and the UK, and their service has only recently been recognised.

This is an excellent study of an aspect of WW2 that hasn't received enough attention from historians, covering both the home front and operations abroad. Well worth a read.