Greek War of Independence in 28mm

I wasn't going to get drawn into the Greek War of Independence in 28mm, as I have a decent collection in 15mm. I have a number of Steve Barber's excellent figures painted for the slightly earlier Serbian revolution, which I could use at a push. However, yes, you just knew there would be a 'but', a new firm, Old Man's Creations, went and produced a new range. They keep posting these fine castings on the Wargaming the Greek War of Independence Facebook page as well. Drug dealers they are!

Work is consuming most of my time this month, so a small six-figure project was just what was required. The models are cast, I think, in ultracast or similar. I am not a great fan of this medium, and they are not cheap, but this is a niche. I prefer the heft of metal, and I have found other ranges to be a bit brittle. However, no problem with these. Some assembly is required with the weapons, which I suspect would have been damaged in transit without this approach. They are a bit bigger than my Dixon Ottomans, which are small by modern standards.

The detail on the figures is superb, making them a pleasure to paint. I slightly overdid the second wash, but I hope I have the right balance after a bit of touching up. They are probably a bit grimier than others have painted them, but I find it hard to believe that they would have been able to keep white fustanella's pristine on the campaign. I love the heroic oil paintings, but they are not photo-realistic. 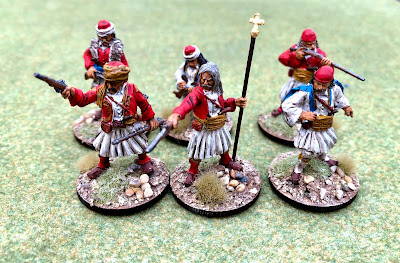 Time being of the essence, a skirmish game was called for. I have plenty of suitable Ottomans, so a quick game using Fistful of Lead rules. We actually played twice, fighting over a bridge. 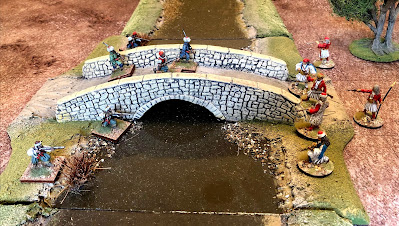 In the first game, I'm afraid I disgraced the revolution by getting slaughtered. Despite drawing some excellent cards, I managed to miss all six shots. In the second game, matters improved, and the Ottomans were sent packing. 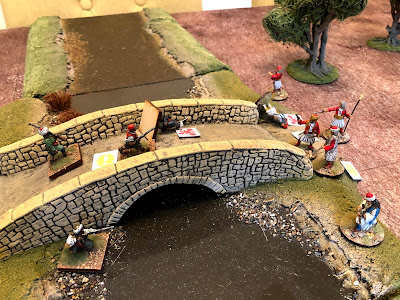 All my heroes survived, although a few were worse for wear. They are a fun set of rules and great for a quick game. I hadn't played with muskets before - reloading is a bit of a challenge when you haven't got a lot of cover.