The King in the North

The King in the North is Max Adams' study of 7th century Britain, focusing on the Northumbrian kings Oswald and Oswiu.  This is a period of British history where the written sources are limited or unreliable. Nevertheless, the author does his best to explain what we know and what we don't, as well as his own view on the likely turn of events. The Game of Thrones allusion is entertaining, but this is what many still call the Dark Ages, and there were no dragons, even in Wales! However, Oswald was the model for Tolkien’s Aragorn in The Lord of the Rings. 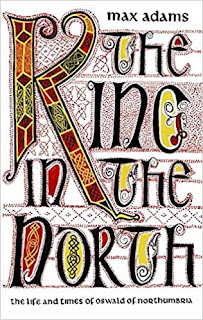 For those visiting Northumbria today, the most visible reminder of Oswald is the Holy Island of Lindisfarne. Oswald Iding ruled Northumbria for eight years, from ad 634 to 642. He was the famed warrior, the ‘Whiteblade’ or ‘Blessed arm’ of legend, created by the monkish chroniclers as he was a Christian king, under pressure from pagan rulers, not least Penda of Mercia. Even by the standards of the day, his was a short and bloody rule. In death, his severed head and arms were displayed on stakes at a place which came to be known as Oswald’s Tree or Oswestry and his skull, a sacred possession of Durham Cathedral, exhibits a sword-cut wide enough to accommodate three fingers.

The author discusses the sites of the major battles of the period. There are many competitors, and the debate can get very lively on social media. I was listening to a History Extra podcast on the somewhat later (937) Battle of Brunanburh, and the author of a recent book championing the Wirral site for this battle was getting regular hate mail. Adams argues that most battles took place on or near Roman roads, especially where they crossed major rivers. Fast-moving armies used them as highways, and there is some evidence that parts of the network were maintained by royal edict. He also emphasises the importance of sea travel. The sea was a highway in Dark Age Britain, not a barrier.

Skirmish games like SAGA are popular for this period with good cause. The warbands of a king might never actually have consisted of as many as fifteen hundred men and often much smaller. For example, Oswald recovered the throne of Bernicia as a consequence of one fairly small skirmish in which he probably caught his enemies forces off guard. However, it was equally easy to lose the crown similarly. Kingship was personal, based on leadership in war. Administrative structures were fairly basic, and there were few towns. Kings rarely constructed the framework of a state that might survive him; that was not the way of the warrior.

Equally, invading armies, particularly from overseas, did not displace the local population. They just got on with their lives when the ruler regularly changed. Genetic studies have shown that, contrary to what chroniclers like Bede and generations of historians and archaeologists believed, most of the modern British population have been here since the dimmest days of prehistory. Adams offers a recent example, the adoption of and enthusiasm for cricket in India (topical with today's test match). Western dress and the English law code ought not to be seen as evidence of India's mass invasion by the British in the nineteenth century.

When Penda killed Oswald at the Battle of Maserfield, his brother Oswiu took over his realms. Oswui was also a warrior king, but he appears to have been a canny, ruthless politician of great sophistication. In addition to war, a Dark Age king had to build alliances with the many kingdoms that made up Britain. Thus, he was the first, the only, Northumbrian king of the seventh century to die in his bed.

Inevitably with a book like this based on limited sources, there is considerable context or padding. However, you cannot understand Northumberland in this period without understanding the kingdoms in the rest of the country and Ireland. The role of the church is also important. No doubt some will contest the author's interpretations, but that is fine. In my view, he argues his case cogently without drifting into fantasy. There has been a flood of books recently on the slightly earlier Arthurian period. Neil Rennoldson reviewing them in the journal Hobilar summed them up well, "as a general rule of thumb, if a book puts King Arthur in the title, then it is probably best avoided."