The Luftwaffe in the Mediterranean

Two for one in reviews this week. I felt my understanding of Luftwaffe air operations in the eastern Mediterranean was a bit of a gap in my research. So, a couple of Osprey's on my 'to read' shelf helped plug the gap. 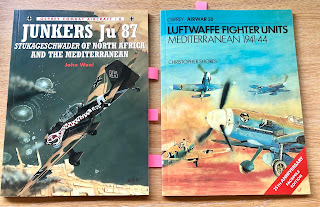 Ever since my Airfix kit days as a lad, I have liked the Stuka. It enjoyed a fearsome reputation early in the war, but the myth was shattered in the early stages of the Battle of Britain when its slow speed made it vulnerable to modern fighters. Even ground troops in the desert learned that however frightening, the chances of being hit during an attack were slim.

The units despatched to the Mediterranean had a new lease of life in the anti-shipping role. The aircraft carrier Illustrious was an early casualty of their pinpoint accuracy, followed by the cruisers, Southampton and Gloucester. The Italian Air Force also deployed the Stuka, called the Picchiatelli. Squadrons were deployed in Albania and Greece as well as in the anti-shipping role.

After Operation Crusader, Allied air strength was on a par with the Axis, which meant the writing was on the wall for Stuka. Air superiority made all the difference, and even ground troops realised they could bring them down with rifle and machine-gun fire. "It gave men courage to stand and fire back at the Stukas, and when they did so they found they could bring them down. I once saw 25 Stukas stage a ten-minute raid and wound one man in the leg. We calculated that leg-wound had cost Hitler all of £50,000."

The Stuka had a brief renaissance during the Dodecannese campaign because the Allies had limited air cover. But, even then, they lost 16 aircraft to a single P-38 sortie.

In this book, you get a narrative of each campaign, profusely illustrated and a fine collection of colour plates.

Luftwaffe fighter units in the Mediterranean were almost always equipped with the Messerschmitt BF109 in its various marks. This aircraft doesn't have quite the same cachet for me, and it was apparently tricky to fly as well. Nonetheless, the design was remarkably resilient, and with upgrades served throughout the war in this region.

Christopher Shores' Luftwaffe Fighter Units, Mediterranean 1941-44 is a smaller book but covers all the campaigns with many period photographs and enough colour plates for the wargamer. One story in the book that I had forgotten was the shooting down of a Bristol Bombay transport aircraft in August 1942. The passengers included General William Gott, who had been appointed as successor to Auchinleck as commander of the Eighth Army. His death led to the appointment of Montgomery in his place, and the rest, as they say, is history.

I tend to find air warfare history a bit monotonous, but these are well written and did the job for me.

And as a postscript, I got some WW2 painting done this week. Most of my Bolt Action opponents have late-war armies, whereas mine are mostly early war. So, I remembered I had a few Warlord sprues that came with Wargames Illustrated. Some grim-looking Grenadiers will do for a start. 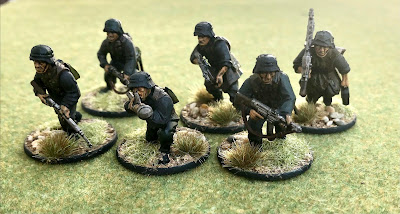