The Secret War is Max Hasting's look at spies, codes and guerillas, 1939-1945. Unfortunately, I missed this in my scan of books on intelligence operations and only spotted it in my local library. While discounting Hasting's political bias, he still writes cracking good history. 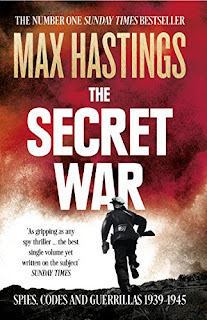 He takes a look at intelligence operations in a global context with plenty of comparative analysis. He has the journalist's eye for a story, which are inserted effectively into the historical narrative. He argues that what matters is how secret knowledge changed outcomes and is pretty sceptical about the outcomes for the amount of effort expended. There are several examples of how carefully collected intelligence could have been sourced from newspapers and academic journals.

He sometimes goes a bit too far with this and allows his political views to colour the analysis. I have studied the Allied deception operations in the Mediterranean in some depth, including the primary documents. He rightly points to the success of Operation Zeppelin in keeping Axis divisions in the Balkans rather than waiting in Normandy. However, it is going too far to suggest that Tito's partisan operations didn't make a significant contribution. In fairness, he does give credit to some of the Soviet deception operations that are less well known to Western readers. His scepticism of guerilla operations also extends to France and other parts of occupied Europe. They were more important for morale than military outcomes.

As a consequence of recent films and other publicity, we now tend to focus on Ultra and perhaps less on the codebreakers who worked on other signals intelligence. The Allies placed a lot of effort on this compared to the Axis use of human intelligence. I liked the story of Abwehr agents using the fixture list of an ICI plant's football team to identify chemical plants the Luftwaffe were not aware of. That is not to say that the Germans didn't have their signals intelligence successes, including British naval codes and were particularly good at signals interception. It was yet again the division of effort among many agencies and how the data was used that mattered.

Hasting's is particularly scathing about the Foreign Office's contribution. The naivete of Ambassadors and their guests and servants is astonishing. The Cicero case in Ankara is a good example of this. I was watching the Turkish TV film take on this story last week. Sadly, this is historical mince, like previous film efforts, but still an entertaining view. What I didn't know was that this wasn't the first time the British embassy had been penetrated, with the ambassador being forced to sack his previous valet. Spies in neutral states also often took cash from several sides.

There are some good stories about fantastic SOE schemes. To give a topical example, in 1942, SOE proposed agents should be dispatched to rally Afghan tribes on a prospective German line of advance to India. Internal squabbles and empire-building damaged the effectiveness of some agencies. I was aware of this as an issue within the German structures, but Hastings also documents the clash between the FBI and OSS.

This is not a quick read (nearly 600 pages) as Hasting's covers a lot of ground. However, it is eminently readable compared to many other studies of this subject I have ploughed through.