This book by Tozun Bahcheli is some background reading for my Cyprus 1974 project. After a brief background chapter, the focus is on Cyprus and the diplomatic efforts to address it. Military operations are only briefly touched on. 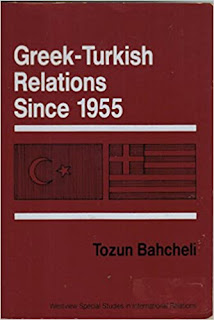 Despite the book's title, the author challenges the view that the Cypriot communities were observers in the dispute between the two countries. He argues that the Cypriot communities often took the initiative, and their role in determining the course of events has been underestimated. The Greek and Turkish governments often reacted to events rather than initiating them.

The first chapter sets the scene for the post-1955 conflict by outlining the island's history and the limited integration between the communities. This goes back to the Ottoman millet system, reinforced by separate education systems and, of course, religion. For UK readers, the pattern of segregation looks dismally familiar to Northern Ireland. However, despite these differences, there was no history of communal violence for over 400 years until the mid-1950s.

The Greek-Cypriot campaign for Enosis (union with Greece) in the early 1950s changed everything. In the early years, this campaign was aimed at Britain as the colonial power with the armed insurgency, led by EOKA, starting in 1955. While Greek governments and domestic public opinion supported Enosis, they were initially reluctant to support the armed struggle, as Britain was an ally. However, Makarios used public opinion and the non-aligned movement through the UN to promote the Greek Cypriot case, gradually winning over the Greek government.

The Turkish government was initially relaxed, hoping that the campaign would fizzle out, although their strategic concerns over Greece gaining control of Cyprus remained. However, public opinion in Turkey also played its part in forcing the Turkish government to take a stronger line in protecting the Turkish community. After inter-communal violence increased in 1958 with more than 120 people killed, Ankara provided more aid to the Turkish defence organisation, the TMT.

The independence settlement in 1960, guaranteed by Greece, Turkey and Britain, initially calmed tensions. However, when Makarios abrogated the agreement and prepared the Akritas Plan to knock out the Turkish communities, the scale of fighting dramatically increased. The threat of Turkish military intervention put something of a brake on the Greek Cypriot offensives. Still, by 1964 the Turkish minority had largely been forced into enclaves for their own security. Only US intervention stopped Turkey from intervening in 1964 and again in 1967, although their capacity to put boots on the ground was limited. The book covers the various peace plans and other initiatives before the Greek military coup of 1974, which led to the Turkish peace operation/invasion.

I took from this book that several of these initiatives came closer to an agreement than I had thought. It is tempting to view the Cyprus issue as impossible to resolve, but this history shows that the diplomats were not entirely wasting their time and effort.  Many Greek Cypriot politicians believed the Turkish enclaves could be whittled away through economic blockades rather than military action. It is a matter of opinion how much of the blame for 1974 can be placed conveniently on the junta rather than Makarios.

The many post-1974 peace efforts have failed to find a resolution. These also have to be seen in the context of growing tensions between Greece and Turkey over issues other than Cyprus. These include the continental shelf, territorial waters and airspace issues in the Aegean. There are also disputes over the treatment of minorities in Istanbul and Western Thrace, which were exempt from the population exchanges in the 1920s.

While this book was published over 30 years ago, little has changed in the region. Cyprus remains a highly militarized island, and relations between Greece and Turkey have not improved. In fact, it could be argued that they have deteriorated to the extent that they came close to armed conflict this year. Overall, this is an interesting and very readable history, if not an uplifting read!