This book by Lawrence Paterson tells the story of the Kriegsmarine Security Forces (Sicherungsstreitkrafte) in WW2. These were the smaller ships, the minesweepers, submarine hunters, escort vessels and patrol boats that made up the largest element of the German Navy, even if much less well known than the capital ships or the U-Boats. They served in most theatres of WW2. 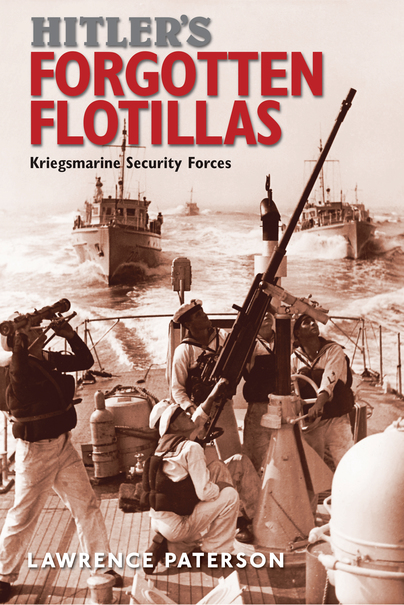 No navy can operate without minesweepers. The Kriegsmarine inherited Type 15/16 minesweepers from the Imperial German Navy, a ship type they were allowed to keep under the Versailles Treaty. When the new M35 class entered service, they were retained as training ships and tenders. German minesweepers were designed to be used flexibly in various roles and were often larger and better armed than other navies. The M35 had two 105mm guns and one 37mm and two 20mm AA guns. They also developed smaller Raumboote boats, similar to the better-known S-boats, although they also became larger and carried more weapons as the war progressed. For those like me who have struggled to sail even these manoeuvrable boats on the tabletop without crashing, there is a picture on page 11 of an R-boat turning on a sixpence!

As the war progressed, Security Divisions were created, grouping flotillas in the expanding theatres of war. Initially in the home waters, northern France, Norway and the Baltic. However, the expansion was constrained by manpower shortages, as the Kriegsmarine was a low priority. There was also a shortage of shipyards, even when some became available in occupied countries. In these theatres, the growing strength of RAF Coastal Command meant boats had to increase their AA guns. They also adopted strange weapons, including an anti-aircraft flamethrower to ward off low-level attacks. This was understandably unpopular with crews. The cypher used by small patrol craft was also cracked, so the RAF knew when coastal convoys were planned.

As German forces moved into North Africa, the Balkans and the Soviet Union, new Security Divisions were established. Headquarters were based in Bucharest, Philippopel in Bulgaria and Thessaloniki. New vessel types were developed, including the Siebel ferry, which may have been slow but did provide a stable gun platform. The Type D could accommodate a Tiger 1 tank.

My particular interest was in the chapter on the war in the Adriatic. Here the security forces adapted captured vessels and used local dockyards to build the new craft. With limited offensive capacity, the Germans relied on minelaying. They used Italian ships and crews, although a number defected to the allies, and Croatian Ustase troops were also used. The shortage of boats made convoy defence challenging as the Allied air support could operate from Italian bases, and the Partisan stronghold on Vis became a base for Allied MTBs and MGBs. The arrival of the Royal Navy's 22nd Destroyer Flotilla significantly increased the capacity to intercept convoys and attack along the Dalmatian coast.

This is an excellent study of a little known branch of the Kriegsmarine, which deserves more attention.

This book should also be essential reading for Cruel Seas players. These are just the German boats you should see most often on the table. So, onto the table this afternoon. My opponent hadn't played before, so he took the German convoy sailing up the Dalmatian Coast. I was attacking with a Fairmile and two Vosper MTBs based out of Vis.

My torpedo attacks on the escort all failed to hit, which was particularly irritating as, for once, I did get the contact spot on. Meanwhile, the escort is packed with heavy weapons doing serious damage to my boats.

However, two torpedo attacks on the transport were more successful in sinking it. Job done. A tot of rum all round! 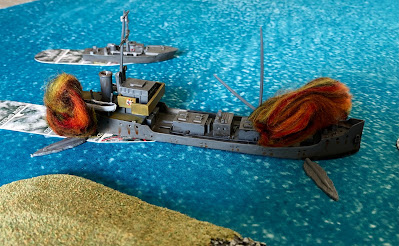