I literally have hundreds of Osprey books, but I wasn't entirely convinced about this Osprey Duel series when it first came out. In essence, they take two weapon systems and compare their development and then how they measured up on the battlefield. This new book, by David Greentree, uses two of the biggest AFVs on the Eastern Front in WW2. However, while they don't have the technical detail of the Vanguard series, or the campaign narrative of Essential Histories, the combination does offer the general reader something different. 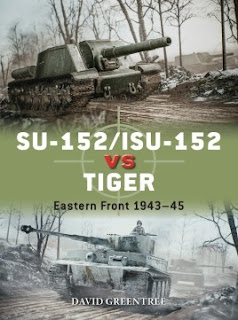 Firstly, you get some campaign context. Weapon systems are not developed in isolation, and for the Germans, heavy Soviet AFVs like the KV1 came as something of a shock. So, in 1942, German designers were given six months to produce a Tiger. The SU-152 had a longer gestation period. It was originally conceived out of a need to destroy bunkers encountered in the war with Finland. Various options were tried before settling on the 152mm SP gun, and the first 30 were produced in February 1943. The ISU-152 had a better designed fighting compartment, although it almost always fired at the halt. Aimed fire rate was 2-2.5 rounds per minute.

There is a chapter on design and development, as well as technical specifications, which gives enough detail for most readers. The 'tankies' will want more, but that's what the Vanguard series is for. In December 1943, the SU-152 and ISU-152 were both produced at Chelyabinsk, with 46 ISU-152s made. On average, 100 would be produced every month from May 1944. In contrast, only 1348 Tigers were built (around 75 per month), due to the high production costs.

A typical combat deployment for the SU-152 was in four batteries of five, with trucks for ammunition supply. Some had an SMG company and a sapper platoon attached. Tiger battalions often had lighter tanks attached to protect the flanks, as well as recce, supply, engineer and signals platoons. The six independent Tiger battalions on the Eastern Front in May 1944 were used strategically in support of key operations. The combat chapter gives several examples of how both types were used in action. These include the Soviet Kharkov offensive of May 1943, which is sadly topical at present. As you would expect from an Osprey publication, these are accompanied by excellent maps. There are also vignettes on junior commanders from both sides.

Many German crews questioned the merit of having a few heavy tanks like the Tiger rather than larger numbers of other AFVs. However, senior officers and Hitler persisted with the Tiger and later the King Tiger. While Tigers were successful in supporting infantry against hordes of Soviet armour, they were less effective in breakthrough operations due to speed and maintenance issues. The presence of Tigers on the front also indicated where the point of main effort would be, and the Soviets developed multiple lines of defence to stop the Tiger from intervening decisively. This meant the SU-152 often came up against the Tiger because Tigers supported infantry formations. Its limited ammunition and slow rate of fire did not make it an effective AT weapon.

I found this book useful and a good read, although I am not convinced they can be described as in a 'duel'. Other books in this series match up clear cut combatants. For example, the M48 and Centurion in the Indo-Pakistan War. The ISU-122 was designed as a dedicated tank destroyer, arguably a better match up with the Tiger, although even the high explosive shell from the SU-152 was enough to blow the turret of a Tiger. The ISU-122 sometimes served in the same unit as the ISU-152. However, different ammunition types made supply more complex.

For the wargamer, this book provides all you need to reproduce typical actions involving these AFVs on the tabletop.