The air war over Serbia in 1999, Operation Allied Force, hasn't had the coverage of the earlier air and ground campaigns in the former Yugoslavia. This new book in the Helion Europe@War series by Bojan Dimitrijevic and Lt-Gen Jovica Draganic is an excellent introduction to the campaign, lavishly illustrated including pages of Tom Cooper and Goran Sudar's lovely colour plates.

This campaign was fought over twenty years ago, but you can still see the impact today. As almost every Belgrade taxi driver I have travelled with reminds you when going past damaged buildings! The cause of the conflict, Kosovo, is also unresolved. 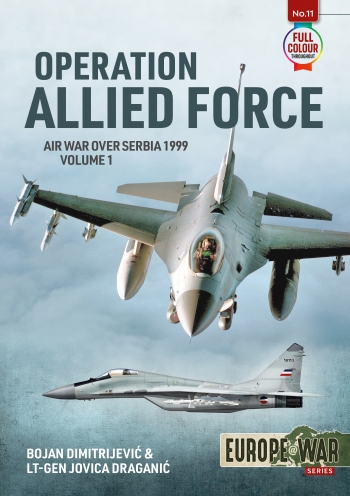 The Yugoslav Air Force was reorganised after the breakaway wars that ended in the peace accord of December 1995. At this stage, Montenegro was still part of the rump Yugoslavia. With the new air force (RV i PVO) limited to 155 combat aircraft and 55 combat helicopters, many of the older types were scrapped or sent to the Yugoslav Aeronautical Museum. A shortage of fuel and economic problems also resulted in a drastic reduction in flying time.
The unresolved issues in Kosovo turned into open clashes between the Kosovo Liberation Army and Serbian forces. James Pettifer's book is pretty comprehensive if you want more on this. NATO started the planning for a new conflict, and several exercises were held. Serbian military leaders warned their government that the armed forces were ill-equipped for such a conflict, a warning ignored by President Milošević. An initial peace deal broke down, and Milošević removed the leading Serbian commanders from their posts. He needed the war to explain to the Serbian people why he was losing Kosovo, an important cornerstone in the Serbian perception of its history and tradition.
NATO issued an ultimatum on 19 February 1999, and air and naval assets from member states arrived in the theatre. The Serbian planners had around 72 available Mig 21s and 14 Mig 29s. The strongest part of the air defence system was the four Missile Air defence regiments armed with SA-3, SA-6, Neva and Kub SAMs. There were also optimistic plans to use Mig 21s in the close support role in Kosovo. The USA provided the largest element of NATO forces based in Italian airbases and on the 6th Fleet. In addition, Britain and France provided significant air assets along with contributions from Germany, Belgium, Netherlands, Turkey, Denmark, Norway and Italy. The book includes clear maps showing the deployment of NATO and Serbian forces.
The early operations targeted a limited number of sites in support of political objectives to force Serbia back to the negotiating table. The Mig 29 interceptors were shot down, and cruise missiles took out major air bases as the RV i PVO scattered its planes. The hardened aircraft shelters provided little security. The SAMs had limited success, including shooting down a US Lockheed F-117 Nighthawk stealth fighter. The pilot was recovered after spending seven hours on Serbian soil. The NATO commander General Clark indirectly praised the Serbian air defence while commenting on the effectiveness of both
sides during Allied Force, but he was obviously tremendously disappointed. The NATo response included the deployment of dedicated SEAD groups with the sole task of destroying the SAM batteries.
After the NATO summit in April, operations were stepped up, and it was claimed that 70 Serbian aircraft had been destroyed along with 40% of SAM-3 and 25% of SAM-6 systems. Airbases were attacked again, and the Golubovci-Podgorica base lost 26 Galebs. On 2 May, NATO cut off power in Serbia using a graphite bomb for the first time. Broader political and communications targets were added, and this led to the accidental bombing of the Chinese Embassy in Belgrade. Ground troops and attack helicopters started to assemble in the region.
The operation ended on 10 June after Milošević agreed to withdraw his forces from Kosovo and KFOR took over. The last European war of the 20th century was over. This volume covers the operations, and a second volume provides further analysis. One for the air warfare buffs.
For the wargamer, the air combat was more than a little lopsided. Of more interest was the battle against the SAMs.