The Tragedy of HMS Dasher

This book by John Steele demonstrates the value of our public library service, even for people like me lucky enough to own lots of books. I came across this book in my local library, which covers the sinking of the escort carrier, HMS Dasher, just off the coast near where I live. I do recall seeing the memorial but had very little understanding of this tragedy and the controversy that continues to this day. 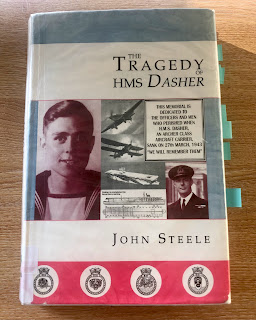 HMS Dasher was one of six escort carriers built or converted in the USA under lend-lease. They were built on a standard commercial hull with a single aircraft lift and hanger. It housed 12 Sea Hurricanes or a mix of Hurricanes and Swordfish. Its armament included ten 20mm Oerlikon guns. HMS Dasher was converted from the cargo ship Rio de Janeiro. It had a crew of over 500. It served in Operation Torch and on Arctic convoy duties. It was known as an unlucky ship by the crew, who shared their concerns with families and friends. This class was known as 'Woolworth's Carriers', after the shop that rarely sold anything more than sixpence. 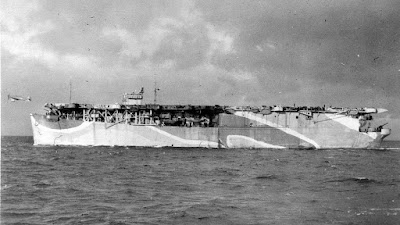 HMS Dasher sank at 16:48 on 27 March 1943 in the Clyde estuary between Ardrossan and the Isle of Arran. The destroyer La Capricieuse, the radar training ship Isle of Sark, and a couple of coastal vessels were in the immediate vicinity. The Clyde estuary is a fairly quiet stretch of water today, but in WW2, it was busy with cargo ships and transports sailing to and from Glasgow. Over 1900 ships were built on the Clyde during the war, and a further 23191 were repaired there. So, it was all the more remarkable that even allowing for wartime secrecy, this sinking is so little known.

The Board of Inquiry was inconclusive as to the exact cause of the sinking. However, it was clear that this was an internal event, not a torpedo or mine. We now know that there were no U-Boats in the Clyde that day, and the sea lanes were regularly swept. It seems likely that the petrol stowage was set alight, and this may have also triggered depth charges in the adjacent storage area.  The Board made a number of recommendations to improve safety in other carriers of this class. The Admiralty blamed the Americans for the design failures, and the Americans blamed the lack of British experience with bulk aviation fuel.

The book carefully assesses the evidence and adds other explanations, including the engine crank case blowing up, an electrical fault and a metal spark. Eye witness evidence from the coast points to an aircraft crash during landing. Whatever the reason and many questions remain, the survivors and their relatives carried these scars for many years. There has been an annual reunion at the memorial stone in Ardrossan since it was laid. At the end of the day, 379 lives were lost, and not through enemy action. We should remember them.