One of a number of interesting Balkan anniversaries this year is the Battle of Manolada. It was fought on July 5, 1316 at Manolada, on the plains of Elis in the Peloponnese region of Greece. The combatants were Louis of Burgundy and Ferdinand of Majorca. Both some way from home and fighting over Achaea, or what was left of the Latin Kingdom by this time.

Ferdinand formed his troops in a forest, but was forced into the open when Louis’s troops burned the trees. The Majorcan troops then charged with around 500 cavalry that broke the first Burgundian line; commanded by John Orsini, count of Cephalonia. The second line, commanded by Louis, defeated the Majorcan charge, and Ferdinand was dismounted and inadvertently slain before he could be taken prisoner.

I have drawn together what little we know of this battle in an article in Balkan Military History.

I refought the battle using Le Art de la Guerre rules and there is an army list in the article on BMH. A pretty straightforward battle with no great tactical subtlety. It was hard to see how Ferdinand could have won, so I am still struggling to understand why he didn't withdraw and join up with his allies in the Catalan Company - not to mention his Spanish reinforcements. I suspect we will never know. 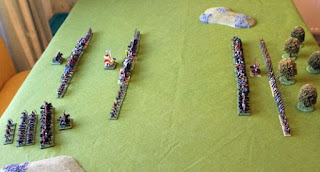