No Stars to Guide

This is Adrian Seligman's account of his WW2 exploits taking a Russian oil tanker from Istanbul to Beirut. Turkey was neutral at this time. However, the journey back to a British base involved sailing past the German and Italian occupied Aegean and Dodecanese islands. 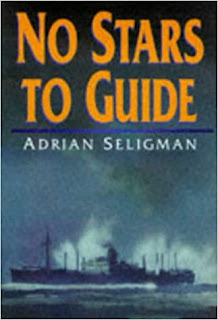 Seligman was a Royal Navy Reserve officer who with two other officers was ordered to Istanbul in December 1941. Istanbul was the proverbial nest of spies, and while there was some informal cooperation from the Turkish authorities, German intelligence was active in attempting to stop the ships leaving. The description of life in Istanbul has some similarities to the descriptions in Midnight at the Pera Palace, and it was certainly a lively spot.

Eventually, they get clearance to leave and Seligman joins his ship called the Olinda, which is crewed by an eclectic mix of White Russians, Arabs, Chinese and Maltese sailors. He has to communicate mostly in French. The previous ship movement had been torpedoed and sunk by the Germans just outside the Dardanelles. The plan for the Olinda was to disguise it as a Turkish cargo ship and sail down the coast in daylight.
The Olinda got through the Dardanelles barrage at the second go and made its way down the coast. The disguise didn't last long. The ship was attacked by German aircraft and Seligman had to revert to the original plan of sailing at night and laying up during the day. This involved some pretty tricky sailing along the rocky coast. The Axis forces frequently ignored Turkish neutrality by crossing into their waters, but of course, so did the British.
When he thought they were through the worse the ship grounded on sandbanks. The charts were always vague on these. However, they eventually got free and avoided the Axis searching forces again to break into open sea and safety.
While there may be some license with the dialogue, the transcript was written soon after the war. In fact, the author sent a copy to the Director of Navy Accounts who in 1946 queried his expenses for the trip! If you find the Istanbul section a bit tedious, skip on to the second part, which covers the journey. That is a cracking read.
The actions in this book would make the basis of a decent Cruel Seas scenario. The Olinda was chased by E-Boats and Italian MAS boats. The Axis also made use of local Caiques for spotting. A few Turkish launches make an appearance, and you could always add the Royal Navy in for additional interest.
Posted by Balkandave at 10:15