I so enjoyed the first in Peter Sandham's series that I decided to move straight onto the second. This one is very firmly based in the Balkans, so it wasn't a difficult choice. 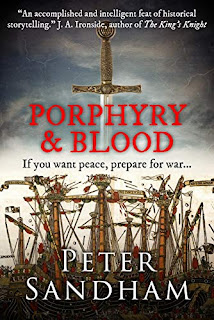 At the conclusion of the first book, our heroine, Anna Notaras, was escaping from the fall of Constantinople. Sady, it would appear that the Scottish hero didn't make it. Anna is now in Venice, acting as if she was the Basilissa, wife of the deceased Emperor Constantine.
She is persuaded by Venice to go on a diplomatic mission to Wallachia, where Vlad the Impaler is about to take on the might of the Ottoman Empire. Needless to say, this is not a straightforward journey across the 15th century Balkans, even without treachery, and more subplots than you can shake an impaled body at!
One of those subplots involves intrigue in the Ottoman court led by the Sultan's father's wife Mara Brancovic, or Valide Mara Hatun, to give her the Ottoman title. The chief physician is her interesting helper as well as the extended family in what remains of Serbia.
I won't spoil the many plots, but Anna arrives in Wallachia and is present at Vlad's famous Night Attack on the Ottoman camp.
The book sticks to the broad historical story and the characters often existed, even if their roles are extended in the book. It is another great read, faster-paced than the first, with plenty to keep the reader engaged.
Posted by Balkandave at 09:52