WW2 Turkish army on the tabletop

My latest project is probably, even for me, one of the more obscure armies of WW2. Not least because they declared war against the Axis in February 1945, and didn't get any fighting units into action before VE Day. However, that doesn't quite mean that they didn't fire a shot in anger, and there are many times when they came close to joining the conflict, under pressure from both sides. While most historians, with some justification, sniff at 'what-ifs', the wargamer can indulge quite happily.
That said, there are a few challenges. There are no Osprey books with shiny colour plates, in fact, very little published material at all, even in Turkish. My main source was a handbook written for the British War Office (in the National Archives), probably by a military attache attached to the embassy. I also think he made a few mistakes, which doesn't make matters easier.
There are pictures, although in black and white, and a few items of militaria. We can reasonably assume that the posed public relations photos show the smartest and best equipped troops. There are some pictures of troops on campaign suppressing a rebellion prior to the war, which back up the British handbook's view that rank and file troops were provided with “very shoddy, ill-fitting clothes which in most cases, look extremely shabby, more especially in the east.”
Finding suitable models of Turkish equipment is not that difficult. because there was virtually no indigenous arms industry. They also used a bewildering amount of different weapons, which must have been a supply nightmare.
Models of infantry figures require some conversion. The best equipped troops had a helmet, which looks almost identical to the French Adrian helmet. The rest had a cap, which the nearest equivalent is the Romanian, Chinese or Japanese version. The other distinguishing feature is that almost all the photos show troops wearing gaiters over their leggings. The summer tunic colour is described as khaki coloured canvass, which appears to come in many shades of sand colour according to manufacturer and wear and tear. I suspect many of the helmets were painted the same colour as the uniform, some look even lighter in B&W, but the only one I have actually seen is dark green. If I can find some hard evidence of other colours, I can always repaint.
I decided to start the project at 15mm, not least because you can get away with more than at 28mm. Although I have held back the cap wearing Romanians from the Great Escape Games range to have a go. The closest fit for the helmet wearing infantry I have found so far are the Battlefront Miniatures WW2 French Tirailleurs. They don't have the greatcoat and the five button tunic is a good match. They have leggings, so a bit of work with a file, gives a suitably creased gaiter.

The cap wearing models were a bit more tricky. All the Romanians I could find are helmeted. The Chinese have bandoliers, which leaves the Japanese. Peter Pig do some packs without the sun flap, so I plumped for them. Again some work with the file on the leggings.

The intention was to retain colours on the battlefield for morale purposes. I suspect that wouldn't have lasted long had they joined the conflict. However, I have kept one for a command element. Anti-tank guns were limited, but they used the French 25mm and the German 37mm, which were easily sourced.
In March 1940 they had 100 Russian T26 tanks and 50 French R35s. The T26s come from my SCW army along with a BA6 armoured car, which they also had. Helpfully, they appear to have retained the Russian green.

I went for the Peter Pig R35 as I was ordering from them anyway. 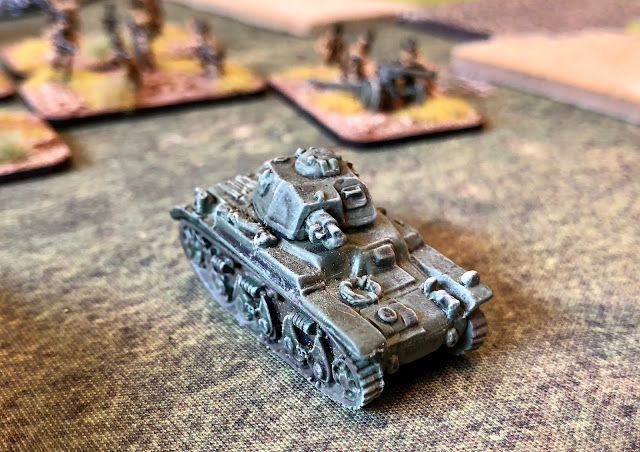 The army needs some more rifle units and a 75mm field gun. Later in the war they acquired German Pkw III and IVs, plus British Valentine, Shermans, more Vickers and other stuff I have in abundance. Opponents can be German, Russian, British and Bulgarian, depending on the period. Now, Bulgarians, there's an idea!
Posted by Balkandave at 17:20