The Portrait of a General - Charles Colville

I am now at the stage when I am digging deep into my 'to read' shelves, reaching tomes that I bought on the basis that they looked interesting but never quite got to the top of the pile. This book by John Colville is a biography of his ancestor who was one of Wellington's less well-known generals. 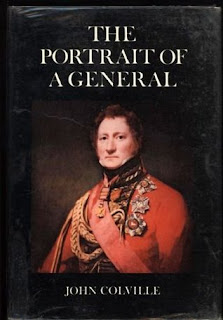 He came from a Scottish military family and was commissioned at the age of eleven, which even for the period was young. His studies included a spell in France, before the revolution, before joining his regiment at age sixteen. He served in the West Indies and Egypt before heading to Portugal with Picton's 3rd Division.

Picton was not the easiest commander to serve under, but Colville appears to have got on well with him as a brigade commander. He fought in most of the major battles and sieges of that campaign, and a few minor ones such as El Bodon. He acted up in Picton's absence and also commanded the 4th Division during General Cole's absence.

The book is largely based on Colville's letters home to his family. His descriptions of the dreadful sieges at Badajos and Ciudad Rodrigo are particularly vivid. He was wounded at Badajoz. Other letters can be a bit tedious but give a flavour of the priorities and concerns of senior officers of the period.

As the campaign rolled across Spain, Colville was mostly with the 3rd Division and played an important part in the decisive Battle of Vitoria. He commanded the 6th Division over the Pyrenees and into France, before returning to command the 3rd Division once again. When Picton yet again returned he was given permanent command of the 5th Division. By the campaign's end, he had commanded most of the army's divisions at some time.

When the army was reassembled for the Waterloo campaign, Colville was in Britain and was appointed to command the 4th Division. he wasn't at the battle, being ordered to secure the army's right flank. He remained a divisional commander during the occupation. On returning home he married and started a family, before being appointed as Commander-in-Chief at Bombay.

Sir Charles Colville probably won't be remembered as one of Wellington's more famous generals. However, he was obviously regarded as a safe pair of hands who fought it just about all the main campaigns of the period. This book isn't a racy read, but it does give the reader an insight into the thinking of a senior soldier of the period through his private letters.