This is a weighty book by John Blair, which looks at the latest archaeological evidence on the built environment and the inhabitants of Anglo-Saxon England. I was given this beautiful book as a Christmas present last year, and until now have only dipped into it. 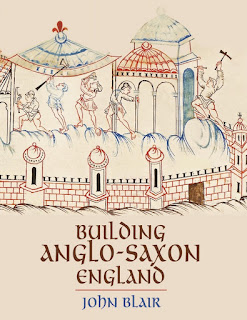 The author takes the reader on a journey through both time and place, identifying what we know about Angl-Saxon England and its influences. It is well illustrated throughout with extensive maps and reconstructions of the buildings. This is important because unlike their Roman predecessors and the following medieval era, the Saxons largely built with wood. In effect, they didn't build to last, unlike the many stone buildings we can view even today.

One of the main takeaways from this book for me was the role of Mercia. When we think of the Anglo-Saxons we immediately think of Alfred and Wessex. This is primarily because of the available written sources, which are few and far between for the Mercians. Their name means 'the frontier people' and the frontier in question was north-west from their heartland in what is now Staffordshire and Derbyshire towards the British and Welsh. The high point of this kingdom was probably during the rule of King Offa in the 8th century. Today better known for the fine walk along the route of Offa's Dyke, his defence against the Welsh. His successor Coenwulf developed this with his own earthwork; Wat's Dyke, which I confess I have never heard of before.

The author argues that Wessex copied many elements of Mercian building and culture. Not just with their own dykes, but also forts including the famous Burghs. Late 8th century Wessex was overshadowed and at times dominated by their northern cousins. Sadly, Mercia has no Anglo-Saxon Chronicle, no Burghal Hidage, no mint names and few charters, which leaves the archaeology described in this book. The archaeological evidence is also growing as the recent weapon finds in Berkshire show.

For the wargamer and military historian, the system of defensive Burghs is of most interest. While we have no written list of the Mercian ones, many can be identified by archaeology. Even the later Wessex ones were not a standardised fortification. Some developed into towns, but others remained simple forts, which reflected the local terrain. However, the technology for building them evolved in Mercia.

The lack of permanent Saxon buildings does not mean any lack of sophistication. The Anglo-Saxons had a complex form of government and coinage, which was influenced by Scandinavia and the Carolingians but was poised autonomously between them. In addition, regionality is important and we should not assume that the better known West Saxon systems applied uniformly across the rest of England.  In particular, we know much less about eastern England during this period.

This is not a light read and probably more for reference than a straightforward read. However, it does challenge our popular conception of the period.