'Zulu Frontiersman' is the edited memoirs of George Dennison who served in a variety of colonial units in South Africa at the end of the 19th century and after. It covers his experiences in all the major conflicts of the period including the Anglo-Zulu Wars and the Boer Wars. 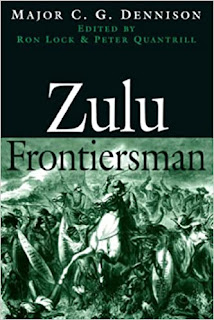 While being born in the Cape Colony, he lived for most of this period in the Boer territories, the frontier states often in conflict with their African neighbours and Imperial expansion. He fought with the Boers in volunteer units and despite his Imperial sympathies respected them as friends and neighbours. As he put it; "Good folk, but the superstition of ignorance ruled them strongly". During these early conflicts, he got himself into some tight spots including being held for execution by the Swazis. Escaping captivity became something of a theme. Of some interest to me, he fought with a Captain Campbell who served with the Turkish army during the Shipka Pass battle in the Russo-Turkish War. Some soldiers of the period certainly got about!

During the Anglo-Zulu War 1879, he fought at the Battle of Hlobane, another of the badly mismanaged clashes of the war, as well as Kambula. His irregular horse regularly raided into Zulu territory. He remained sort of neutral in the subsequent First Boer War but was forced to move into the growing Kimberly diamond fields.

Then we have a gap in his narrative before the Second Boer War of 1899-1902. His original account of the war was published in 1904. He managed to get captured twice, got wounded and fought in many skirmishes. He also lost two sons.

He finished the war commanding the Dennison Scouts during the guerilla phase in the Western Transvaal. He was highly critical of many British officers (but not the rank and file) who allowed leaders like De Wet to escape because of 'jealously and incapacity'.  While he opposed the British farm burning policies he was equally scathing about the Boer atrocities, including the shooting of native runners in cold blood; "The shedding of native blood is not counted as murder by many of them; on the contrary, they talk and laugh over the deed, describing the fear and agony of the poor sufferer with jeers and laughter."

The editors have generally done a good job in tidying up the narrative, although it is sometimes difficult to follow the broader context from his text. A bit more explanation might help the general reader at the start of each chapter. Nonetheless, this is a raw description of the wars fought on the frontier of South Africa during the period with plenty of material for the wargamer to use in small skirmishes using rules like 'The Men Who Would Be Kings.'