Any Bernard Cornwell book is a reason to cancel all engagements and just read it. However, the conclusion of The Last Kingdom series is a double cause for a weekend devoted to the story of Lord Uhtred of Bebbanburg, Northumbria and the making of England. 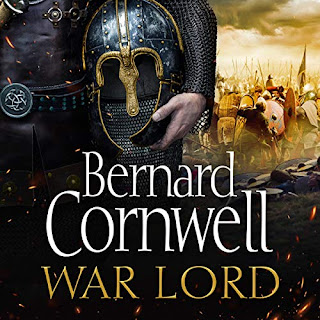 Our hero is feeling his age, as well he might after thirteen books in which he fought his way across the length and breadth of what today we call England. When this saga began, Alfred was barely holding onto to Wessex. As the story unfolds, the separate kingdoms of Mercia and East Anglia would be incorporated into England, leaving only Northumbria. Not to mention invading Vikings, Scots, Welsh and the Norsemen of the islands and Ireland.

Despite various plots to remove Uhtred from his fortress at Bebbanburg, he remains semi-independent and loyal to Alfred's grandson, Aethelstan. Albeit disposing of some of his enemies in Aethelstan's court on the way. Bebbanburgh is an important border fortress, not only for Aethelstan but also for Constantine of Scotland.

This book concludes with the Battle of Brunanburh in AD 937. Arguably the most important, if little known, battle fought on English soil. Precisely which soil has been the subject of considerable debate over the years, although now largely accepted as in the Wirral thanks to recent archaeology.

On this battlefield, Aethelstan faced up to a coalition of enemies led by Anlaf Guthfrithson, King of Dyflin in Ireland and Constantine of Scotland. Their allies included Strathclyde, the Hebrides, Orkneys and local Norse from Northumbria, Cumbria and the Wirral. We don't know much about the battle other than, in the words of the Anglo-Saxon Chronicle, 'never was there such slaughter in our islands'.

I won't spoil the detail of the plot but needless to say it is another page-turner from the master storyteller. I was watching his interview with Dan Snow on History Hit recently in which he indicated that his next book would be a return to Sharpe. Excellent news!