Memoirs of a Stuka Pilot

Helmet Mahlke trained as a naval aviator expecting to serve on Germany's planned Zeppelin aircraft carrier. Instead, his unit was transferred to the Luftwaffe and he took part in most of the early war campaigns. He flew the iconic Stuka dive-bomber or properly, the Ju 87 Sturzkampfflugzeug. 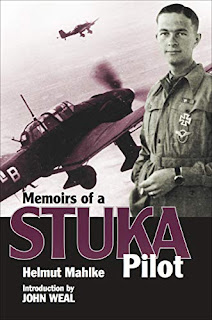 The early war period was probably the heyday of the Stuka. Operating when the Luftwaffe had air superiority, and able to protect the Stuka from enemy fighters. The exception was the Battle of Britain when the Stuka units suffered significant losses. One fact I wasn't aware of was the Stuka's nickname, Iolanthe. Why is not made clear? Assuming that Luftwaffe pilots were not big Gilbert and Sullivan fans, perhaps it was the moth of the same name.

Mahlke didn't serve in the Polish campaign and first saw combat in the French campaign when his unit flew over sixty missions. These varied from interdicting supplies and reinforcements, to direct attacks on front line positions. Unlike Allied fighter-bombers later in the war, there was not always a forward air observer calling in Stukas, so they had pre-planned missions or attacked targets of opportunity.

The next stop was Sicily and North Africa, where the Stuka managed the conditions pretty well. It was particularly interesting to understand how ground operations were organised. As with the rest of the German armed forces, motor transport was scarce. So, his unit cannibalised British trucks in both France and North Africa. When moving airfields, the ground crew sometimes traveled in the Stuka, or in planned operations were moved in transport aircraft.

In many operations, the Stuka was most effective attacking ships, even when there was extensive flak. His unit sank plenty of transport ships during the siege of Tobruk. Pilots were surprised how much damage the Stuka could take. Also in North Africa, they worked with an Italian Stuka unit known as the Pichiatellis. They were rated highly by the German pilots along with Macchi fighters who provided close fighter cover in North Africa.

Finally, his unit was present at the invasion of the Soviet Union. Early targets included army headquarters and bridge approaches. He was shot down behind enemy lines three times but got back as the German advance caught up with him. However, in the last one, he was badly injured and after recovering spent the rest of the war in staff roles on the Eastern Front. He was also awarded the Knights Cross. His unit ended the war flying FW 190's in the ground attack role and surrendered to the British on an airfield not that far from the Keil base they started from. Mahlke died in 1998.

I am not a huge fan of air warfare histories, but this is interesting, perhaps because it involves ground attacks. Well worth a read.