Atatürk: The Rebirth of a Nation

On a visit before Christmas, my daughter took a rare interest in my bookshelves (she is a microbiologist). The question followed, 'do you have any books on Turkey?', with my response 'is the Pope a Catholic!' and a brief (well not too brief) tour of how my several thousand books are organised. The mystery was resolved on Christmas Day when one of my presents was Lord Kinross's classic biography of Kemal Atatürk. I had actually read it in the library many years ago but never owned a copy. 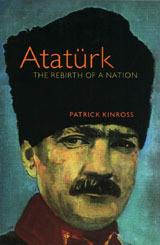 The founder of The Republic of Turkey was born in Greece, albeit Salonika when it was part of the Ottoman Empire. It was middle class upbringing, which despite some opposition from his mother, led to a military education and career. After service in the Middle East and the against Italy in Libya, he arrived back in Europe too late to fight in the First Balkan War, which saw the loss of his Macedonian home. This was a loss he felt deeply with his mother and sister having to flee the family home, "how could you surrender that beautiful Salonika to the enemy", he said to brother officers.

Mustafa Kemal, as he was known in the days before Turks adopted surnames, made his name in the Gallipoli campaign of WW1. As the British official historian puts it, "Seldom in history, can the exertions of a single divisional commander have exercised, on three separate occasions, so profound an influence not only on the course of a battle but, perhaps, on the fate of a campaign and even the destiny of a nation". As a modern visitor to the battlefield I could see the importance of the positions he held and also his gracious commentary. 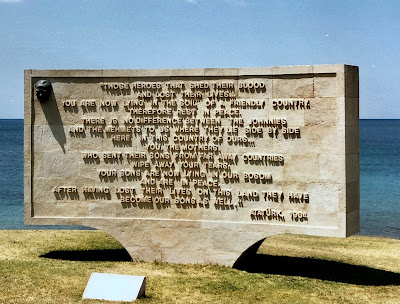 He went on to command on the eastern fronts where his eventual successor as President, Ismet (later Inönü) was his chief of staff. Military comrades from this time would form an important group in supporting him later. He ended the war in Syria and also visited Germany, where he met Hindenburg and Ludendorff.

He actually sounded out the British for a role during the occupation of Constantinople. Then broke with the rump Ottoman government by going to Ankara with others to form the Grand National Assembly and after a short civil war, the resistance to the division of Anatolia by the wartime Allies. His command during the Greek-Turkish War of 1919-23 is given a relatively short treatment in this book, although the outline of the extended Greek advance and Turkish counterattack is explained. If you want more on this, there is a very recent book worth reading.

The end of the Sultanate and the creation of the Republic of Turkey is explained in detail. The way the British sneaked the last Sultan out of Istanbul is an entertaining story that I hadn't recalled. The eunuchs came before the wives in the evacuation priorities, achieved in the back of an ambulance! Kemal was elected the first President of the Republic, which was based in Ankara rather than Istanbul. The rest of the book deals primarily with his internal reforms and the treaties that secured the boundaries of the new state.  Military matters are not entirely absent, as there were a number of revolts, primarily in the Kurdish areas.

Ataturk (Father of the Nation) as he became known in 1935, showed extraordinary insight into world affairs in the 1930s. Despite significant pro-German sympathies amongst the Turkish leadership, he described Hitler as a 'tin-peddler' and expressed his horror at his language and thoughts. He promoted counterweights to Italian and German imperialism through the creation of the Balkan Pact in 1934. This was followed by the Saadabad Pact with the countries on the eastern border. In discussion with General Douglas MacArthur, he predicted the outbreak of war between 1940-45, the German advances and defeat once the USA entered the war. But the real victors he predicted would be the Soviet Union. I had read this before but didn't know he also compared the Maginot Line to a tomb that anyone could go around the edge of it.

I enjoyed this traditional biography and learned some new details about his life and times. My one criticism would be the way the author ascribes almost mystical characteristics to Ataturk, the 'extra dimension' as he puts it. There is no doubt that Ataturk was a remarkable leader, certainly in military terms if perhaps less so politically. But his character and physical bearing is possibly given too much weight, and modern readers might find this approach a bit grating at times.

That said, it's well worth a read, and thanks to my daughter for the addition to my library. Her mother was less impressed by her adding to it!

It also inspired me to get on with some related painting in the form of another squad of 28mm WW2 Turkish infantry. These are converted from the Crusader Miniatures French Dragon Portes. Better equipped Turkish regiments had French style helmets and a similar tunic. These are sans the greatcoat that so many French wargame figures have, so work well for my purpose. They are also very nice models, which I have painted in the winter uniform, unlike my 15mm armies in the summer kit. More to come from this range. 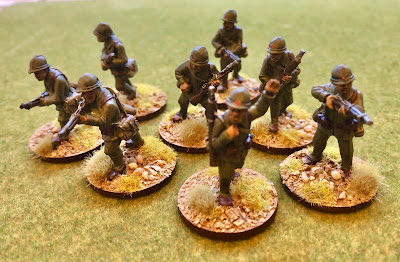