This is the fourth in the Arrows of Albion historical fiction series by Jonathan Lunn. It is set in the War of the Breton Succession (1341-56), which was one of many conflicts bound together in the Hundred Years War. 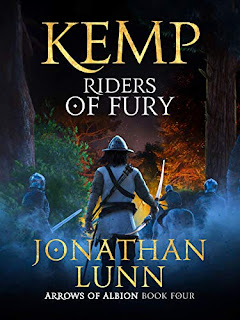 Our hero is Martin Kemp, an English longbowman commanding a unit known as a Twenty, which is fighting for the English backed cause. He falls out with his current employer and joins another band of near brigands. He helps them to capture a castle and make a claim on a larger landholding. After falling out with this band, he joins the Anglo-Breton army just as the book reaches its conclusion at the Battle of Mauron 1352. There are the usual sub-plots and characters, but I won't spoil the story.

The Hundred Years War is best known for its big pitched battles like Crecy, Poitiers and Agincourt. However, it was mostly a small war of skirmishes and sieges, making for a good story and ideal for the tabletop. It also had some great characters and a few of these sneak into this story, including Rob Knollys and John Hawkwood. Both rose from humble origins to command significant forces, which was pretty rare in any country of the period.

And for those who argue warfare was a bit samey with French knights shot to pieces by the Longbow, this was not always the case. Longbowmen needed the protection of men at arms, especially when they had insufficient numbers as was probably the case at Mauron. The French were also learning from their early mistakes and used dismounted knights and the terrain to minimise the longbow's effectiveness. The Longbow was also most effective as a mass firing weapon, which is less of a superweapon in skirmishes.

This is a good read with all the essential elements of historical fiction. I thought I had read others in the series, but I can't see them in my collection. So, I will take another look at the earlier books in the series.