This is the second in Christopher Nicole's historical fiction Partisan series set in Yugoslavia during WW2.  Despite the first in the series, Partisan, being riddled with historical inaccuracies, I decided to persevere. I'm afraid that was a mistake. 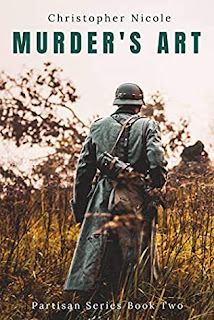 Sadly, few of the unnecessary errors in the first book are corrected. Draza Mihailovic is still described as the former 'Chief of the Yugoslav General Staff', which he wasn't. Ante Pavelic, the Croatian leader of the Ustase, turns up again liaising with Mihailovic. Croatian nationalist meets Serb nationalist is not a marriage made in heaven!

Our hero, the left behind British military attache, and his new girlfriend Sandrine are now with Tito's partisans in Uzice. It was attacked by both the Chetniks and Germans, so the basis for the story is fine. However, the author has linked the massacre at Kragujevac, which did happen, with the attack on Uzice. In his retelling, the German left pincer moved through the town where they were attacked by our hero and his all-female regiment (women were generally incorporated into units) before they skipped back to Uzice. That is a distance of over 100km in rough terrain! Even by the remarkable partisan standards, 50km a day was the limit, and 30km was the norm.

The murders are attributed to the SS when the Wehrmacht was just as capable of committing atrocities, particularly former Austro-Hungarian commanders in Serbia.

I have no problem with sexing up historical fiction. However, the Nazi S&M in this book is possibly a bit much for many readers. Then we have female partisans engaging in sexual activity with our hero as their commanding officer. It may have been an unwritten rule, but amorous relationships were strictly forbidden. So at the very least, they would need to be discreet.

I'm afraid these points and others got the better of me. It may be historical fiction, but some basic research would have corrected many of these errors and still provided a good story. I won't be moving on to the next in the series.