I have been reading Volume 5 of the late Sir Michael Howard's history of British Intelligence in the Second World War. This volume focuses on strategic deception operations launched by the British and later with their allies. Most of us will be familiar with the deception operation aimed at persuading Hitler that the D-Day landings would be at the Pas de Calais rather than Normandy (Operation Fortitude). However, that very successful operation was based on many others that the British had become skilled at delivering and made no small contribution to the outcome of WW2. 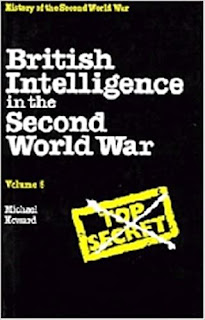 Deception aims to conceal a commander's true intentions to lead his adversary to act in such a way as to make his own task easier. It is not enough to persuade the enemy to think something; it is necessary to persuade him to do something. All battlefield commanders attempt to do this, but this book is about strategic deception. The British achieved so much in this regard because they had the advantages of excellent intelligence, particularly signals using Ultra, and the UK's high level of security. Later in the war, allied air superiority meant the Germans couldn't see what was actually happening. So poor was photo-reconnaissance that even deception ops were not spotted.
I have spent quite a lot of time reading the National Archives files on the operations launched in my main area of interest, the Eastern Mediterranean. They make fascinating reading, and the scope and detail of the plans are quite remarkable. One of the main achievements was to make the Germans believe that the Allied order of battle was larger than it actually was. For example, in 1942, the deception unit 'A' Force based in Cairo created one bogus armoured division and seven bogus infantry divisions. In 1943 they added eight more infantry divisions and several HQ units. We know from signals intelligence that the Germans bought much of this, to the extent that they overestimated British forces by 40-45%.
This was achieved by a mix of actual and dummy troops, including realistic signals traffic and dummy equipment. Double agents and other offensive intelligence also contributed.
One of the most important deception operations in the Mediterranean was Operation Barclay in 1943. This operation aimed to divert Axis units from Sicily by threatening targets in the Eastern Mediterranean, including Crete and the Peloponnese, as well as bringing Turkey into the war. This included the famously successful Operation Mincemeat, which planted a courier's body carrying dummy plans for an invasion of Greece.
While it was impossible to hide Operation Overlord given the array of troops assembling in England, a deception Operation Zepplin was mounted to maintain credible threats in the Eastern Mediterranean to stop the Germans from shifting units to France. While it would be impossible to hide the experienced divisions coming home, three more bogus divisions were invented to replace them. This meant a quarter of the notional Allied strength of 70 divisions in the Mediterranean were actually bogus.
There were deception operations in the Far East thanks to Wavell creating a similar unit to the one he had established when commanding in the Middle East. In my view, Wavell is one of the underrated British commanders of the war. Churchill may not have liked him, but he was more innovative than others. His Far East deception unit was commanded by the author Peter Fleming.
This is a fascinating book, written well by one of Britain's greatest historians. It is quite difficult to get hold of at a reasonable price, but it is well worth a read when libraries reopen.