This is a new translation of Johann Nobili's somewhat sanitised study of the Austrian campaign against the rebellious Hungarians during the winter of 1848. Sanitised because the original by Heller was deemed too critical. The book is edited by Chris Pringle, author of the excellent Bloody Big Battles (BBB) rules. He has made the text more readable, added maps, and corrects the author's spin on history through extensive footnotes. 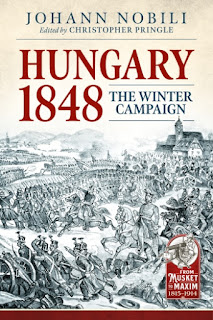 1848 was the year of revolutions across Europe, and the Hungarians took the opportunity to break with the Austrians, although not the Habsburgs. Once the Austrians sorted out their own revolution, they sent an army under the command of Field Marshall Windisch-Gratz into Hungary. This campaign was not initially successful, and the Austrians had to call upon the Russians to help them out. This study covers the period from the invasion until Windisch-Gratz was removed from command.
Chris has some sympathy for the Field Marshall, who probably had insufficient troops for the task and was short of key troop types, particularly light cavalry. He also had two corps commanders who rarely did as ordered. Ban Jellacic was overly cautious, and Schlick was the opposite, striking out on his own when he was ordered to concentrate.
There are several interesting campaign details. One of these is the use of rockets. My view of these is probably covered by the episode in Sharpe and Wellington's view of them. However, this campaign showed that they had some advantages. They were much more mobile than artillery and excellent as incendiaries. Another point is the very low casualty rates. Generally, around 2% compared with 20% or more during the Napoleonic Wars, which were fought with similar weapons. The reasons appear to be low troop density rates and a tendency to withdraw once flanked on the relatively level terrain. The campaign also saw the first substantial use of railways to transport troops.
The war of movement involved plenty of skirmishes, which suits my modest 28mm forces for the campaign, using the Steve Barber range. These often involved river defences, and therefore bridges were crucial. There were major battles, including Kapolna and Isazeg, which are still manageable, and the orbats are very useful. Typically 25,000 to 30,000 per side, over quite large areas. BBB rules in 15mm or smaller would work well for this type of game.

It would be fair to say that despite Chris's improvements, this isn't an easy read. The troop movements are not easy to follow, and the language is typical of the period. It is also a one-sided view of the campaign with the Hungarians plans and movement only touched upon. Chris's notes help address the deliberate bias, particularly Austrian claims of being outnumbered. Despite the challenges, it is worth persevering with this book. The Hungarian revolution is a fascinating conflict, and this is an excellent resource given there is very little in English.

Onto the tabletop with a few of my 28mm units. I use the Rebels and Patriots rules for 28mm games of this period. They allow you to field the range of troop types from well-trained professionals to the almost untrained militia. 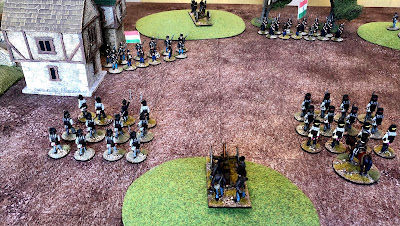