This is the second of Ben Kane's Hannibal series. He tells the story of the Second Punic War through the lives of a Roman and a Carthaginian family, who become, somewhat unlikely, entwined.

This book takes us through Hannibal's greatest victories in Italy - Lake Trasimene and Cannae. The Carthaginians are commanders of veteran Libyian spearmen who re-eqiuip themselves with Roman gear to great effect. The main Roman character leaves the cavalry and ends up as a Hastati legionary.

Ben Kane is a great story teller and this book is very difficult to put down. I am writing this some 60 miles from the Italian mainland where these battles took place, finishing it in a thunderstorm, not unlike some of those described in the book! 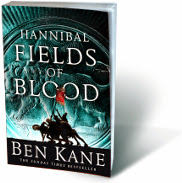 Posted with Blogsy
Posted by Balkandave at 13:15