After reading S.Turney's 'The Thief's Tale' I decided to give his Marius' Mules series another go.

This is historical fiction set in the time of Julius Caesar and in particular the conquest of Gaul. The second in the series deals with the Belgic tribes who Caesar noted were the fiercest of the Gaulish people. 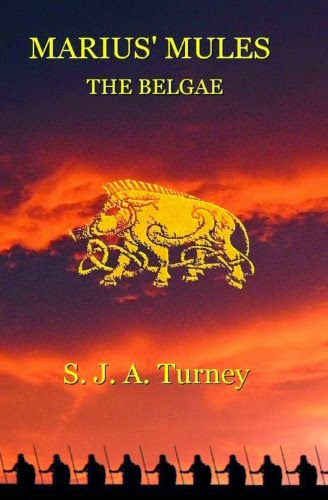 Unlike other historical fiction of this period, Turney tells the story through high command figures, primarily Marcus Falerius Fronto commander of the Tenth Legion. This gives a more strategic feel to the story, albeit with plenty of individual action. Roman commanders led from the front. Or at least they do in fiction!

I found the first in the series a bit slow, but I warmed to this one. The battle action is particularly vivid and I like the way the author deals with the Roman engineering skills. He also gives full credit to the Belgae , not simply writing them off as barbarians. They often showed considerable strategic and tactical skill.

On the subject of historical fiction, the BBC are doing a new drama series based on Bernard Cornwell's Saxon 'Last Kingdom' series. It is inevitably being compared to Game of Thrones. Uhtred will make a great character. I can't wait to see this, but it looks as if I will have to wait until next year!

I start my summer holiday today, so hoping to catch up on some reading, some gaming and a special Balkan holiday trip....
Posted by Balkandave at 21:43