Duel in the Sun

Duel in the Sun is the latest supplement for Warlord's popular WW1 platoon level game, Bolt Action. It covers the war in the Meditereanean from the Italian invasion of Greece to the allied assault on Italy. The main section of the book covers the Western Desert campaign, one of my favourites, but not in 28mm. For me the desert war is about tanks, and they are best gamed in smaller scales - 1/200 being my personal preference. I bought this supplement primarily for the Greek campaigns, even though the army lists are in other supplements.

There is a decent scenario for the Battle of Tempe Gorge, an Anzac delaying action against the German 12th Army's juggernaut invasion of Greece. Also a scenario for Maleme Airfield on Crete during Operation Marita. There are some new unit descriptors, including the Maori battalion, with special rules as formidable warriors.

I doubt if I will be tempted into the desert in 28mm, although those LRDG vehicles look very nice and raiding warfare is very doable in 28mm. My Vis based Adriatic commando unit should work in Italy and some of the later scenarios look interesting.

As a break from my main Napoleonic project, I have painted a Warlord German 105mm howitzer. I haven't had much luck with the off table artillery in Bolt Action. I am more like to stonk my own troops rather than the enemy. So I decided to bring the big guns into the table.

One assembled this is a nice model, but not for the first time, I find the absence of instructions hugely irritating. The excuse that 'we are only a small firm', simply doesn't wash. If you charge £18 for a modest model like this, the least you can expect is a simple diagram. Pictures of the finished model on the website is of little use when they don't show the internal set up. Warlord really can and should do better than this. Rant over - for now! 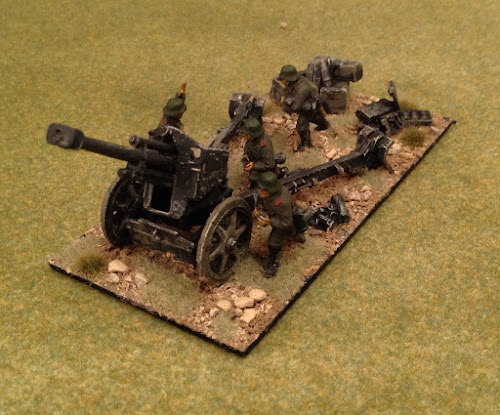