Last of the Hungarians

No, it's not a new movie, but this week's lockdown painting. The last two units of my Hungarian army for WW2. 'Last' is, of course, a variable concept for wargamers, meaning until the next shiny toy comes along!

First up are a unit of Hussars. At the outbreak of war, the Hungarian army had two cavalry brigades, which included two, 2 battalion Hussar regiments. It was reconstituted as the 1 Cavalry Division in 1942 and the 1 Hussar Division in 1944. Hussars fought on most of the fronts Hungarian armed forces served in, primarily against the Soviet Union. They were used as a mobile reserve or pursuit unit - essentially mounted infantry rather than the traditional cavalry charge. The models come from the Great Escape Games range. 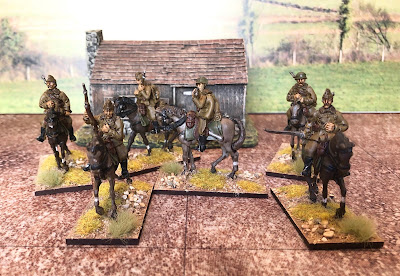 I kept the Buzoganyveto (Mace) rocket launcher for last. Any Warlord model that requires assembly is a job to be put off, and this is no exception. You can just about work out how to assemble the parts from the web site photos, but as usual, the lugs for the wheels are just ridiculously inadequate. Several goes later, and superglued fingers, I managed a rickety effort. 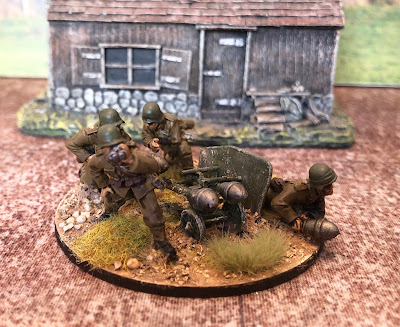 Some 600 of these were produced by the Hungarians and mostly used for the defence of Budapest. It could knock out a Stalin 2 tank and was most useful in urban fighting. There was also an anti-personnel version called Zapor (Rainfall). The Bolt Action Fortress Budapest supplement has wargame statistics.