This week's wargame with Zoom was the Battle of Doiran. Not the better known First World War epic, but the earlier clash in the Second Balkan War on 6 July 1913, fought between the Bulgarians and Greeks. The rules are Bloody Big Battles and the scenario comes from the Balkan Wars supplement written by Konstantinos Travlos. The figures are 15mm.

This is the smallest of the scenarios in the book in terms of army size, picked to make it easier to play over Zoom. The Bulgarians hold the Doiran hills on the left, which are rugged steep terrain, and the Greeks have to fight their way over to reach the objectives - towns on the other side. The Bulgarian troops were similar in numbers but the Greeks were better armed and higher quality, including three regiments of Evzones. 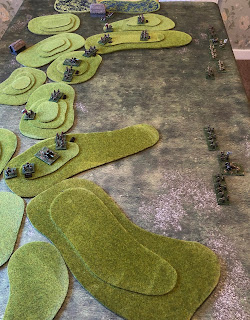 The tabletop (picture is West to East with Lake Doiran at the top) uses my Spearhead hills which show the levels well but don't really give an impression of how difficult the terrain was for the Greeks. So, here is a picture of the hills from the British cemetery (Greek direction) taken on my last visit to the battlefield. Today the battlefield is on the Greek/North Macedonian border. 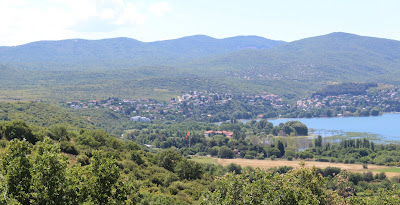 My plan, playing the Greeks, was to attack both flanks, concentrating my artillery there. The first picture is on the right flank heading for Doiran, and the second is the left flank. 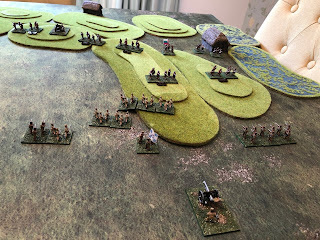 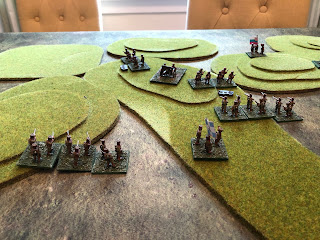 The Evzones quickly captured the first spur but then struggled to get moving again after sustaining casualties. More success on the left flank, although again it took too long. 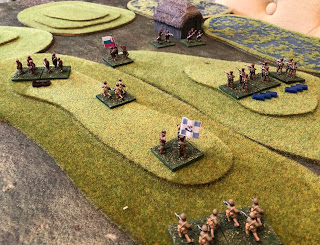 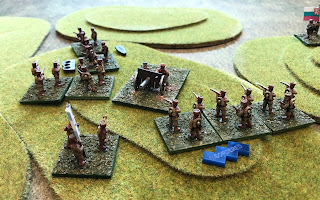 As nightfall came, the Greeks had captured the high ground above Doiran but had been repulsed twice by the dwindling Bulgars in the centre. 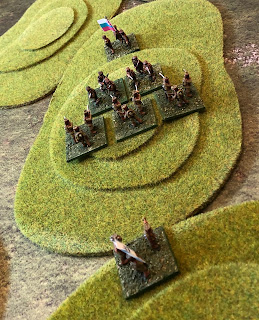 Victory for the Bulgars as the Greeks failed to capture any objectives. The Greek spin doctor claims we would have captured Doiran next morning! But time ran out.

This is another set of rules I should play more often. They work well over Zoom as the mechanisms are simple, if frustrating. Dicing for movement is a pig when you are in a position to exploit a good tactical position. This scenario would also work as a solo game with just a few card draw options for the Bulgarian passive side.

The Greeks did better historically than me. They succeeded in capturing the Bulgarian positions opening the way for an invasion of old Bulgaria. συγνώμη σύντροφοι (Sorry comrades!).

As an aside, the author of this supplement also does a good YouTube series on the Greek-Turkish War of 1919-22. Well worth a listen while doing some lockdown painting.