My bedtime fiction reading has been Joyce Bergvelt's, Lord of Formosa. It is a novel, although it follows closely the historical narrative, inserting fictional dialogue. It is a period of history I knew nothing about. 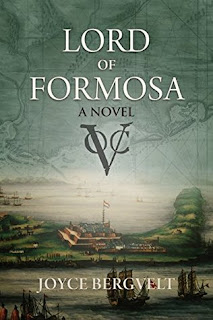 The book tells the story of Koxinga and the Dutch colony on the island of Formosa (modern Taiwan). Koxinga was born in Japan in 1624 with a Chinese father and a Japanese mother. His father was the powerful trader and Ming dynasty loyalist Zheng Zhilong. The Ming were on the decline as Manchu armies invaded northern China to form the Qing Dynasty.

Koxinga moved to his fathers home in Fujian, southern China when he was seven. He was educated as a Mandarin and became the heir to his father's vast empire and commander of some of the strongest and most successful Ming armies. After his father's defection to the Qing, he took command of the remaining resistance until his coastal bases were squeezed by the advancing Qing armies.

Meanwhile, the Dutch East India Company (VOC) had established a colony on Formosa in 1624. The island had a mix of native tribes and Chinese inhabitants. Their main base was Fort Zeelandia in the southern part of the island. Dutch rule was punctuated by rebellions and the usual colonial exploitation of trade and natural resources.

In 1661, Koxinga decided to relocate most of his forces to Formosa. He quickly captured most of the Dutch territory and besieged Fort Zeelandia. The fort fell after a nine-month siege. Koxinga established the Kingdom of Tungning as a base to attack mainland China. However, he died, probably of malaria, in 1662. Succeeded by his son, the Kingdom only survived until 1683 when a Qing invasion fleet captured the island.

The author has written a well-researched story around the historical narrative, filling in the gaps and bringing the characters alive. A very good read.