Having helped write the new To the Strongest! army lists for the medieval Balkans, I thought lockdown was a good opportunity to play with them. I used 15mm figures and the standard 130pt armies as I only have a temporary narrow table. The mat is custom made 100mm squares from Deep Cut.

I almost made a disastrous error when ordering this mat. I typed 10mm instead of 10cm. Fortunately Deep Cut send you a sample photo before printing, and I noticed a large number of squares!

TtS! is a good game for playing solo. If you use historical setups there are relatively few decisions that have to be made. The cards are still important. I usually physically move to the phasing side to give me the right perspective.

I used the Ottomans in each game because while they were aggressive strategically, on the battlefield they were tactically defensive. Generally trying to draw enemies onto the Janissaries and countering with the cavalry wings. Again, very suitable for solo play.

The first game was against the Serbs. The Serbian army is one of my favourite medieval armies. They suit my aggressive wargame style. I am not much of a sit on the baseline sort of player. 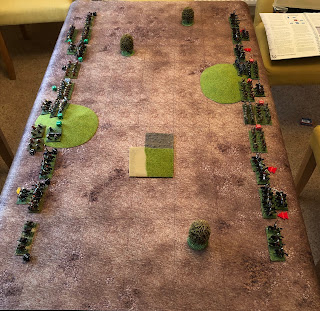 If you are not familiar with TtS here is my review. The D6 by units is ammo supply and the red charge markers designate heroes. They can be used once to redraw a 'to hit' card. 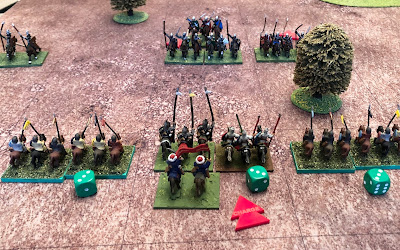 Sadly, the Serbs hurtled across the table but got shot up before they could bring their knights into combat. If you can disorder them by shooting before combat they need and 8+ in melee rather than a 6+.

Next up was the Wallachians, led by Vlad the Impaler. 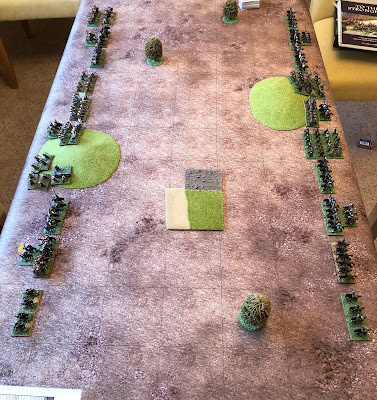 The Wallachian infantry pinned the Ottoman centre, without breaking through. 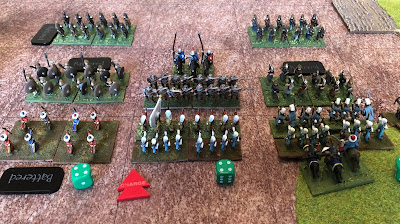 Meanwhile, the Wallachian cavalry smashed through both Ottoman wings. Game over.

A grim end for many Ottomans! Vlad earning his name! 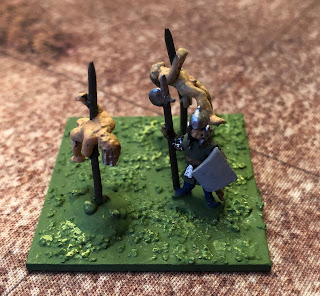 Finally, The Albanians had a go at the Ottomans, led by Skanderbeg. 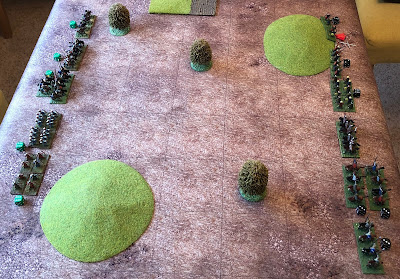 TtS! doesn't have an official cut down game like ADLG with its 100pt version. I was playing this game with a pal on Zoom. Playing with video conferencing is slower than normal so I devised 50pt armies, using the minima and halving everything. You have one command, instead of the normal three or four.

In the first move, Skanderbeg drew a 2 for the group move, which gave plenty of scope for more moves and the Albanians flew across the table. The light horse peppered the Ottoman flanks. 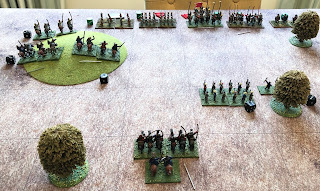 However, this is where the ammo rules come in because they then had to charge the Janissaries, who are tough to beat, even when the Albanians got around the flanks. Victory to the Ottomans.

The cut-down game took around 40 minutes once we got started, very suitable for a video conferencing game. If anyone fancies a go drop me a line, all you need is a microphone and camera on your device. Zoom works on PC/Mac, laptop and phones.