The Struggle for the Mediterranean 1939-45

More Second World War strategy reading for me in lockdown. This book was written not long after the war (1951) by Raymond De Belot, a Rear Admiral in the French Navy. 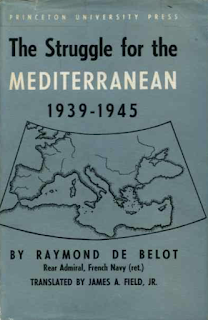 The author reminds us of the role of the Mediterranean in conflicts throughout the centuries before outlining its strategic position in the Second World War. As a British strategist put it; "Who holds the Mediterranean, holds the world". He then outlines the main powers and their position prior to the conflict. As an Admiral, his focus is understandably on naval warfare, but the land campaigns are not ignored.

The campaign narrative offers little that is new, although some snippets were new to me. For example, Mussolini's sudden decision to enter the war left one-third of the Italian merchant marine in foreign ports. 218 much-needed ships that were effectively lost.

The importance of Italy's lack of raw materials is not always well understood. This meant relying on Germany, which itself was struggling. As a consequence the expansion of Italian armed forces during the war was minimal. The lack of oil in particular often meant that the Italian navy could not leave its bases. On 8 March 1943 Mussolini wrote to Hitler; "Our tragedy is that we are forced to fight a people's war with arms left over from 1914-18". Rather late to recognise that he had attempted the role of a first-class power with a third-rate industrial base!

Italy also had no real wartime strategy. The author makes an interesting comparison with Japan, which had similar raw material challenges, but did have a clear strategy. Japan was ready, Italy was not. Japan had a bold plan, well thought out and precise; Italy did not.

The author discusses all the big strategic decisions. Why the Germans didn't finish off the allies in the Middle East before turning on Russia. The British/USA strategic tussle over the 'soft underbelly' approach favoured by Churchill. He implies sympathy for General Marshall's position, arguing that the Balkans are just as defensible as Italy, unlike the plains of North-West Europe. As for a push from Italy into Austria, he quotes Marshall as saying; "In Europe's innumerable wars no vigorously opposed crossing of the Alps had ever been successfully executed."

However, he also reminds us that the Germans were expecting an invasion of the Balkan peninsula. He quotes Doenitz saying after Salerno: "The enemy's next strategic moves will evidently be directed against the Balkans."

The author argues that had the allies invaded the Balkans rather than France, the Russians would have simply moved North well beyond the Elbe. This would have resulted in a similar post-war position.

This is an interesting take on the subject and well worth a read.