My latest bedtime fiction reading has been Michael Jecks' 'Field of Glory'. This is his take on the Crecy campaign of 1346. 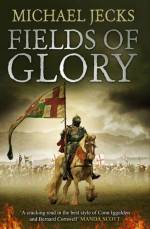 As with most historical fiction, the story is told through some minor players in the English (and Welsh) army of Edward III. These include Sir John Sully, who apparently died aged 106 or 107. Astonishing today, never mind the 14th century, not to mention that he fought in almost every major battle of the period. In the Crecy campaign, he was in his sixties.

The other characters come from a vintaine (unit of up to 20 men) of archers led by a professional soldier called Berenger. Their backstories are examined as they cross the channel and march across Nothern France.

Most of the book is taken up with the actions of a classic chevauchee. Essentially the pillaging of the enemy's territory, for its own sake or probably, in this case, to bring the French King to battle. While the author describes the actions of this warfare well, it is a bit tedious at times. While our heroes are given special tasks, it somehow lacks the variety of sub-plots you would get in a Bernard Cornwell book. The characters are gritty, but perhaps not that interesting.

The final chapters are devoted to the Battle of Crecy. The numbers and formations in this battle are disputed, but the author goes with the plausible view that Edward planned to bring the French to battle in terrain that favoured the vastly outnumbered English. We then had hordes of French knights charging up the slope to the English line while being cut down by longbowmen and some early battlefield artillery. Most sources agree that there was still a fierce hand to hand combat, but the longbow had sufficiently weakened the French to deliver victory.

I did struggle at times with this book. It is true that the lives of all soldiers are full of fear, boredom, misery and sudden horror. I just think historical fiction needs a bit more than that.