I read a lot of books, particularly anything related to the Balkans. However, every so often a really 'wow' book arrives. This study of the Ottoman Empire at war, by Bruno Mugnai, is just such a tome. 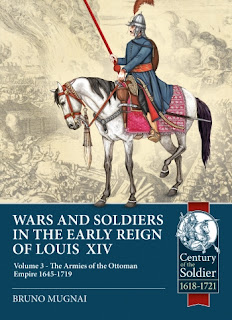 The timescale is 1645 to 1718. A period that starts with the long, but successful conflict with Venice that culminated with the capture of Crete in 1669. In the Balkans, the Ottomans campaigned in Transylvania, were held in Austria at Szentgotthard, defeated the Poles, and finally halted at the siege of Vienna in 1683.  After that, the Ottomans were on the defensive, with the Holy League pressing into the Balkans, retaking Hungary and Belgrade. The Venetians captured much of the Peloponnese and the disaster at Zenta resulted in the Treaty of Carlowitz in 1699.

The Russians opened a new front in 1711, which demonstrated the Ottomans could kick back, surrounding Peter the Great at the Pruth. They also recaptured the Peloponnese. The period ends with Prince Eugene's victory at Peterwardein and the Peace of Passarowitz in 1718.

This is the Ottoman army some way from its peak, but still able to deliver decisive results on the battlefield. The author takes the reader through the complex structures that held the Empire and its wider 'Commonwealth' together.

The meat of the book is a long chapter on the Ottoman armies covering all the various units, from the well-known Janissaries to the more obscure militias and specialist troops. The Ottoman allies, like the Tartars, are also covered.

Then another long chapter on the Ottoman art of war, which examines the strategy and tactics used during this period. The coverage of logistics is particularly good, given the challenges of getting huge numbers of troops to the battlefields on the edges of the Empire. Finally, a chapter on dress and equipment.

The whole book is profusely illustrated and there are colour plates in Mugnai's crisp style.

When I started to collect Ottoman armies we had a few stapled booklets for reference. Now we have beautiful books like this, which benefit from new research using western and Ottoman sources. If my collections were not so large, I would be seriously tempted to start all over again!