The full title of this book by Nicholas Rankin is, 'Churchill's Wizards: The British Genius for Deception 1914 - 1945'. While Churchill was undoubtedly a supporter and protagonist for deception operations, he was not quite the guiding light throughout both world wars. 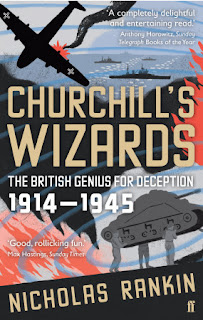 As the scope of this book indicates, British deception operations were developed during WW1 and then expanded and refined in WW2. The first half of the book covers early camouflage efforts, often aided by artists. In fact, the British learnt much from early French efforts, which were on a much larger scale. In addition to camouflage, there were steel trees as a base for snipers and extensive propaganda efforts aimed at enemy civilians and neutral countries, as well as opinion at home.

It was in WW1 that the British adopted the lessons learned in the Boer War, most notably in the Middle East with T.E. Lawrence. Lessons that are still used today. The 2006 US Army field manual on counter-insurgency extensively cites T.E Lawrence's 'Evolution of a Revolt and 'Arab Bulletin'.

Churchill had seen how the Spanish had been outfoxed in Cuba in 1895 and later famously in the Boer War. The creation of the SOE owed much to Lawrence and the Arab Revolt.

Churchill also took a direct interest in camouflage. At the outbreak of WW2, he was at Scapa Flow as First Sea Lord when he was told dummy ships had fooled aerial spotters. He said they needed spectacles because there were no gulls around them, "Feed the gulls and fool the Germans!"

The book covers the WW2 developments in camouflage and propaganda as well as commando raids. Often the very same people picked up where they left off in WW1. Britain's spy networks were effective in WW2, to the extent that the Germans never successfully operated agents in the UK. The work of GARBO, Juan Pujol Garcia, was a very special example.

WW2 also saw the development of large scale deception operations. The best known is Operation Fortitude, which aimed to persuade Hitler that the real D-Day landings would be in the Pas de Calais.  Montgomery credited these deception measures as playing 'a vital part in our success in Normandy'. Whole fictitious armies were created for the purpose. There were similar operations in the Meditteranean and to a lesser extent in the Pacific.

A deception plan persuaded the Germans that Auchinleck was not ready to launch his Crusader offensive because three divisions had to be diverted to the Caucasus to help the Russians. That was one of many devised by Colonel Dudley-Clarke. A better-known plan was Operation Mincemeat, which persuaded the Germans to divert troops to the Balkans before the invasion of Sicily.

This book is an excellent and comprehensive study of deception in wartime. It undoubtedly played an important part in winning both world wars, even if some of the lessons have been misunderstood in more recent years.
Posted by Balkandave at 16:02