I am making serious inroads into my 'to read' shelf. Although if it's anything like my lead mountain, there won't be space for long!

This book by Michael Kerrigan has been there for a while, but it deserved promotion. The author clearly shares my passion for time spent at the National Archives looking through the original wartime files. He has pulled together a range of plans, not just from the UK, that never happened. Some I was familiar with, others were new. 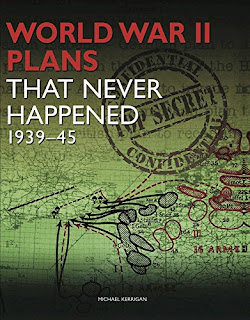 My former job included the Highlands of Scotland, and I once extended a work trip to take my mum down the west coast. She was paddling in the sea in a beautiful secluded bay opposite the island of Gruinard. Very happy until I explained that the island was off-limits because it was contaminated with Anthrax, after a wartime experiment! What I didn't know was that the allies planned to drop 5 million spores over German pastureland, killing cows and civilians who eat the meat. It was named, ironically, Operation Vegetarian. Fortunately,  an official pointed out that the countryside affected would be uninhabitable for generations - like Gruinard.

There are several Japanese plans that the High Command eventually decided would be an overstretch. Australia was an obvious one, but another was Operation Madagascar, occupied by Vichy France. This plan caused some friction with the Germans who regarded it as within their sphere of influence. The British pre-empted the plan with Operation Ironclad, securing the long route to the Middle East with a British base.

There are several weapon plans in the book. The German Amerika bomber I had heard of, but not a similar Japanese Project Z. This was a six engined Nakajima bomber with a range of over 5,000 miles. It had a staggering 400 machine guns to ward off fighters.

There are a few plans in my own research field. Operation Handcuff was a plan to capture Rhodes, which didn't get off the ground because the Germans disarmed the Italians quickly and reinforced the island. Eisenhower wasn't prepared to divert resources to support Churchill's eastern Meditteranean adventures either.

On a similar theme, there is a chapter on the competing allied war plans for the invasion of Europe. Plus an interesting German plan to invade Turkey at the end of 1942, called Operation Gertrude.

Overall, this is an interesting look at many of the 'What-Ifs' of WW2. A concise text and profusely illustrated. Well worth a read.