The Wildest Province: SOE in the Land of the Eagle

This is Roderick Bailey's study of SOE operations in Albania during WW2. Albania was a secondary area of operations compared to Greece and Yugoslavia, but the British sent in 7,000 rifles, 5,000 SMGs and 16 million rounds of ammo, amongst other equipment. 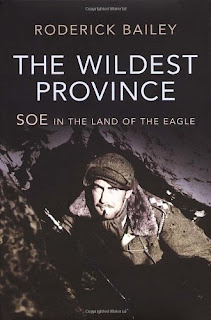 The effort to foster resistance in Europe actually started very early in Albania. Plans were made in 1940 and the first operation was launched against the Italians in April 1941. Exiles were recruited in Istanbul, home for many Albanians who had fled the country or part of the trading community. The SOE officer, Margaret Hasluck, was one of the very few British officers who had detailed knowledge and had travelled in Albania. However, she had fixed ideological views on which Albanians should be supported and her reports were increasingly unreliable.

The book details the various missions sent to Albania by SOE. By 1943, there were three main armed groups in Albania. The nationalist Balli Kombetar was the largest, but had done very little fighting against the occupation forces and increasingly collaborated with the Germans. The monarchists, led by Abas Kupi, supported King Zog but again did very little fighting. As in the rest of the Balkans, it was the partisan LNC who did the most fighting, increasingly dominated by communists, led by Enver Hoxha. They gained support mostly in the south and with the young. The older establishment became increasingly out of touch as they collaborated in an effort to maintain power.

The British sent missions to all three groups, which in itself created tensions. However, the priority was to support those fighting the Germans, and that meant the partisans. Junior SOE officers were concerned about the impact of this after the war. There were right and left-wing SOE officers, which has resulted in a number of conspiracy theories over support for the partisans. However, we now know that the War Cabinet was focused on short-term effectiveness and they knew who was actually fighting through ULTRA intercepts. Sadly, Hoxha turned out to be one of the most paranoid post-war leaders in the Balkans, leading Albania into isolation and economic hardship.

One of the most well known SOE officers was Major Anthony Quayle, who went on to appear in a number of classic war films including, Ice Cold in Alex, The Guns of Navarone and Lawrence of Arabia.

I have read a couple of memoirs of the participants, which while interesting, lacked the objectivity and access to recent sources that form the basis of this book. I would also recommend Bernd Fischer's Albania at War 1939-1945, for a wider look at the conflict.

Reading this book during the 75th-anniversary commemorations of VE Day, you cannot but admire the courage of the SOE officers who fought in some of the most inhospitable terrain in Europe.