Æthelflæd, the Lady of Mercia

Founder, Fighter, Saxon Queen: Aethelflaed, Lady of the Mercians is Margaret Jones' study of the daughter of Alfred the Great who became the ruler of Mercia. This is one of those books that I was interested in but probably wouldn't have bought without a very tempting offer from Pen and Sword Books. I have also just binged my way through the latest series of The Last Kingdom, in which Aethelflaed is the central character. Mind you, Jones makes no reference to her liaison with Lord Uhtred! 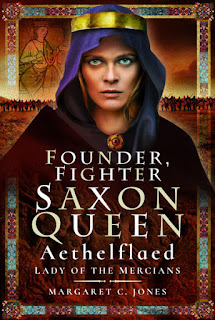 The real Aethelflaed had a busy and testing childhood, as her father struggled with the Vikings. This included the period as a refugee on Athelney, after the Viking attack on Chippenham in 878AD. Her mother Ealhswith was a Mercian and she would have been brought up to be wedded to domesticity and a largely religious education. The Wessex court would have received diplomats from across Europe and many refugees and other nobles would be trained up in Alfred's care.

At the age of 15, she was married to Aethelred (yes Saxon names can confuse), an ealdorman of Mercia. The marriage strengthened his position in Mercia, something Alfred probably planned. The defeat of new Viking raids carved out a more secure Mercia, under the overlordship of Wessex.

Bernard Cornwell doesn't write a great part for Aethelred in The Last Kingdom, but he was probably better than depicted there. He built defences against Viking incursions and strengthened Mercia. He died a year after the victory over the Vikings at the Battle of Tettenhall (probably not of his wounds as Cornwell depicts) and Aethelflaed found herself the sole ruler of Mercia.

Aethelflaed undoubtedly did lead the Mercians into battle against the Vikings and the Welsh, but much of her rule was spent fortifying towns and building forts in strategic positions. These are described in some detail in the book along with the Burgh system. By 916 she had constructed a formidable grid of defences, which matched those in Wessex.

She died in 918, probably of natural causes. Her daughter Aelfwynn was named as her heir, but King Edward of Wessex as overlord had other plans and forced his own son Athelstan on the Mercians.

The sources on Aethelflaed are limited, so the book is padded out with a description of what it meant to be a ruler of an Anglo-Saxon kingdom. We also get a chapter on her legacy and where you can find her today.

The core of this book still tells a remarkable story of a remarkable Queen. Female rulers were the exception and she truly was Alfred's daughter.

A good story inevitably leads to an outbreak of wargamers disease. I have a small Saxon army, mostly from the earlier period. The Footsore Miniatures bulletin sealed the order and what was my reducing lead mountain, has suddenly got bigger!

Footsore do a very nice Aethelflaed, even if her charging into battle axe in hand is probably stretching it a bit! 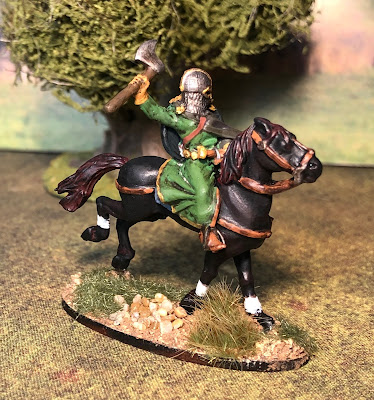 In addition, we have some Saxon archers. These come with separate hands and bows which involves fiddly drilling and glueing. I can't see any reason for this other than the manufacturer's convenience, which annoyed me. But they are nice models. 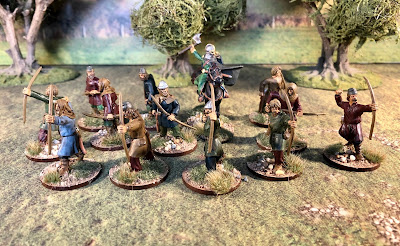 Alfred and some Fyrd are next onto the bench.